Vulpis is searching the academy. In the meantime, Avodany is attacked by Humans who want to recapture their town. 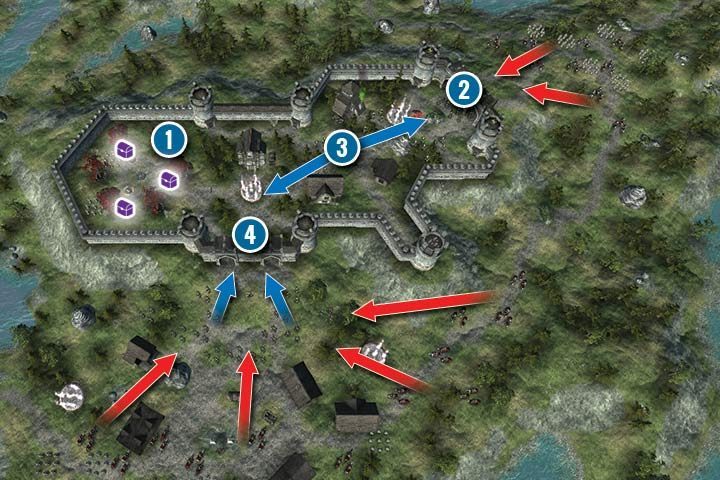 Defending the town won't be easy. The enemy has a lot of units. They will attack both gates. The enemy has only two types of units - Cavalry and Hailstormers.

Vulpis and a few mages are inside the fort (1). This hero will have no problems attacking and hiding behind the trees. After that, order him to assist units defending the southern gate.

The northern gate is well-prepared for the assault (2). Leave the Pikemen in the passage and order the Shamans to strengthen them by casting shield spells. Thanks to that, your Pikemen won't receive any damage from the Cavalry. A Pikemen unit with a full line-up is able to eliminate Cavalry in one attack. If you can, order the dragon to attack the isolated mages. Let the enemy take the initiative - keep doing that until you eliminate the majority of their Cavalry. After that, counterattack and destroy the Hailstormers. There are few more units inside the town (3). You can use them to defend a gate that is under a heavier attack.

The southern gate is in a worse position (4). Your units are outside the gate, they aren't supported by Shamans, and they have to face more enemy units. Order all units to fall back behind the gate or into the town. If you stay here, your soldiers will be an easy target for enemy Cavalry and Mages. If you want to slow the enemy down, sacrifice one or two Pikemen units by ordering them to attack the closest Cavalry unit. In the meantime, place your army behind the gate and wait for support from the other gate. Don't be afraid to attack the enemies when their units start charging at you. Pikemen will deal with Cavalry. After that, you will only have to chase down the Mages.

If something goes wrong, fall back between the buildings and trees inside the castle or move towards the other gate. There, you will have a better chance of winning this battle. Forest and buildings limit the Hailstormers' attack range. Cavalry will also have problems with maneuvering. Try to summon additional Shamans or Mages - they will be useful in eliminating enemies and strengthening your army.