The three heroes and their army reach the gates of Avodany. They come across unusual allies who are in danger. 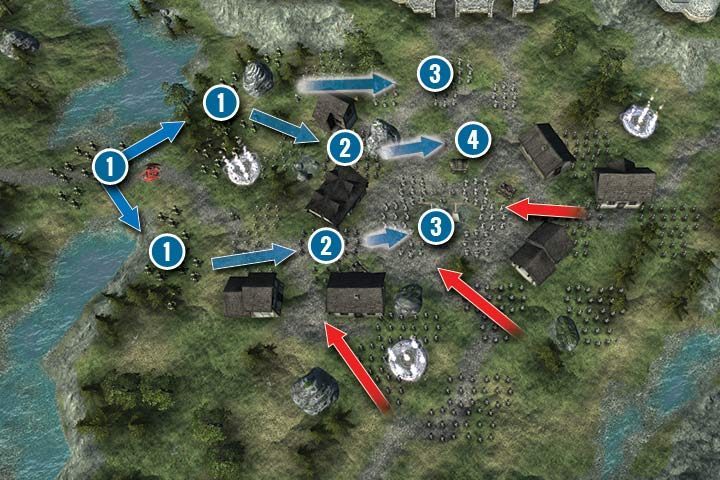 This fight will be rather challenging - you encounter a new unit. Hailstormers are a variant of Human Battle Mages. Their squad consists of 9 units, and they deal a lot of damage (Hailstormers can deplete more than 100 health points). Luckily, they can't move to attack you, and they can only shoot at targets that are within their range. Their numbers are a problem in this mission. The enemy also commands a large Militia army. However, the biggest threat comes from Serith.

Start with moving your Archers (1) and break through the Militia units (2) - they are standing in your path to the Mages (3). If you don't defeat them within the first few turns, the enemy will kill your units with projectiles. Your archers are Orcs - they are stronger, more resistant and have a better reach than their Goblin counterparts. Use these units to eliminate the Militia and to clear the path for your heroes and melee units. You can also use the teleports in the north and the east to get additional units.

Remember, your priority is to eliminate Hailstormers and Serith (4). Be careful - try to not expose your units (especially heroes and mages) to multiple mages. The enemy likes to target the weakest or the most dangerous units - this can be really problematic due to the number of ranged units. Once you defeat the Mages, eliminating the lightly-armored Militia shouldn't be a problem.

If you encounter an enemy in a narrow passage, try to leave only one unit in this squad. You should also block their direction of attack (use any of your units, even Archers). A Militia unit in this state won't deal a lot of damage - use this method to have an easier time to maneuver your armies.

Summoning a Shaman may be necessary to complete this mission. This unit can strengthen your army making them less vulnerable to enemy fire. Another thing you can do is to summon additional Archers or Battle Mages. If you still have problems, buy scrolls that cast shield, and healing potions.