You reach Percival's tomb. However, it won't be as easy to ride as Vulpis thought. 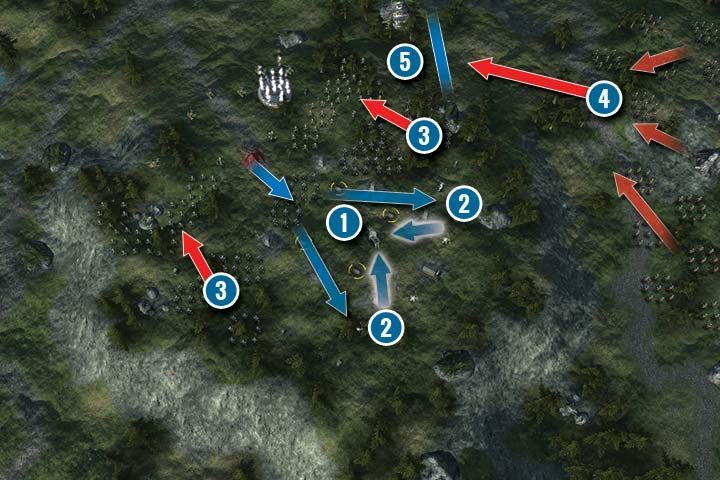 You encounter Percival's illusion (1). He takes a form of a powerful hero - defeating him will be difficult. He is surrounded with Healers (2) and a few Infantry units (3). Also, the local Militia is moving towards them (4). The Healers are the most problematic here - they can transfer their health points to other units (2). They can also regenerate 20 health points per turn. A Healer can heal any of their allies in one turn, but these units are also an easy target. After they heal someone completely, they are left with 1 health point which means that you can eliminate them in no time.

The first step is to fight with the hostile Infantry units (2). Don't leave the forest, lure your enemies to you. Most of the times, enemies will charge straight at your units. Don't fight with Percival right away! Doing this is a waste of time and energy. Try to make an opening in the middle of the enemy line (1) and use it to attack the Healers. Eliminating these units is your priority.

Then, start fighting and eliminating Infantry units on the hill. Wyverns and the dragon will be very useful here. Their special ability allows you to bypass enemy armor and deal damage over time. Time to deal with Percival's illusion. Surround him with your units and attack. The last step is to defeat the Militia coming from the west. These units are weak - they will attack you in waves. Wait for them to get close to you (5). Place Wyverns in front of the forest - remember, these units can move only on empty tiles or roads. They aren't resistant to melee attacks, their health isn't great, too. Remember to always support Wyverns with other units.