On their way to Avodany, your army has encountered enemies staying in a small village. 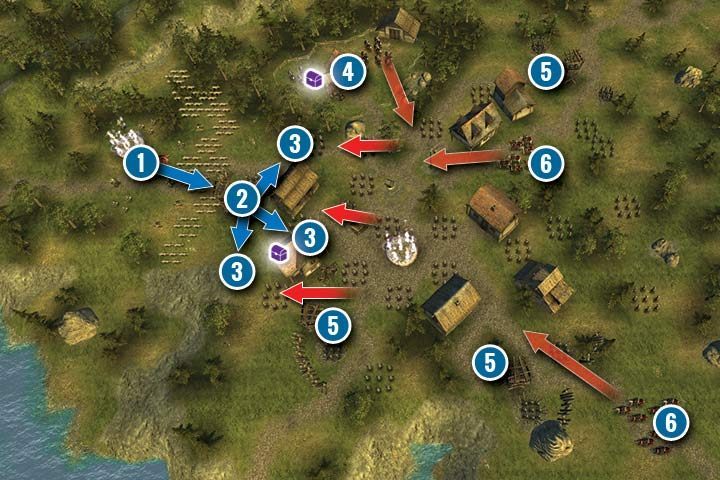 The Greenskins have encountered Militia and soldiers. Defeat enemies in a small village. You control a rather large number of units. However, the majority of them are Wolves and Wyverns (1). Wolves will serve as a bait and cannon fodder while Wyverns, mages, and heroes will focus on dealing damage. You can also use Shamans - they are necessary if you want your units to survive this battle.

Eliminating enemy units is the biggest challenge here. Your Wolves don't deal a lot of damage. However, their biggest advantage is that they can move fast in forests and they can slow enemies down. The map is full of cavalry so make good use of your units. You also need to act fast. Otherwise, you will have problems with defeating enemy infantry - these units are weak, but there will be a lot of them.

Deal with Crossbowmen on the tower (2) as fast as you can. Defeat them by sending your ranged units. Order Wolves to block the narrow passages between the buildings (3). Send a few of your Wolves north through the forest - they will slow the cavalry down. If you can, try to order your heroes to fight with the cavalry units (4) in the forest near the stable.

Wait for the Crossbowmen to leave their towers and fortified positions (5) before you start moving further into the village. Try to deal as much damage as possible in one turn. By doing that, you will reduce their numbers making them less dangerous. Then, focus on eliminating enemy cavalry (4,6). Use Shamans to strengthen your units, place a few of your squads in the forest or be the first to attack. The last choice is usually the best one but remember to hide your weakest units from the cavalry or leave them in a well-fortified position. Thanks to that, the cavalry won't be able to move and they will attack the nearest unit - they won't be able to use their charge. Lastly, deal with the remaining Militia units.