You and Rogdul keep on fighting. This time, he faces Humans. 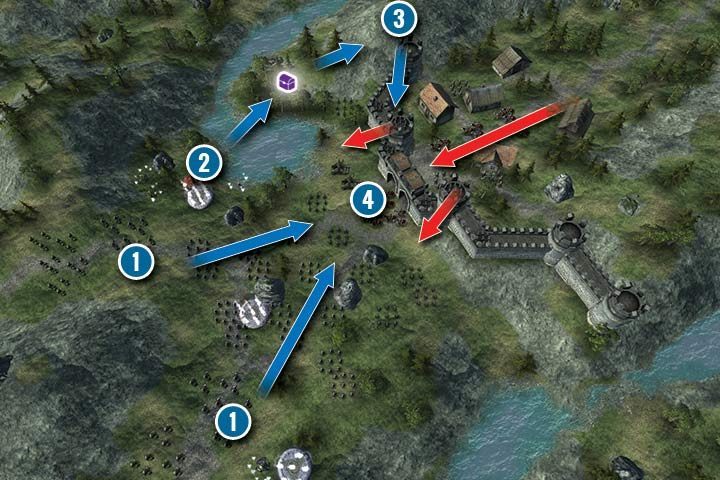 In this mission, you accompany Rogdul and his army. The problem is that you can't control your ally's army (1). The objective is to capture the gate and the walls - eliminate the defenders and their reinforcements.

The key to victory is to command your heroes and Shamans skillfully. Use Rogdul to freeze the strongest enemy units. Vulpis and Gaurg should help your infantry in eliminating defenders. Send the dragon (2) on a special mission - order this unit to fly north, above the lake, and loot the chest. You will find a strengthening scroll that reduces received damage by 50%. Capture the empty tower (3), the one in the north, and start eliminating enemy Crossbowmen. Try to stay out of the range of other units defending these positions.

The allied army needs your help in reaching the gate (4) - without them, you won't be able to win. Use Shamans to strengthen allied units fighting in the first line (1). Thanks to that they will be able to survive long enough. If you can't cast a shield on the "blue" units, try to strengthen your hero and send him ahead of the allied units. Your hero will help the allies to survive. Rogdul is perfect for this task - he has a rather good health regeneration.

Once you defeat the majority of the defenders near the walls, and your Archers get closer to the Crossbowmen, order your units to attack. At this point, your dragon should be able to go through hostile ranged units. Time for ordering Vulpis and the Shamans to join the battle. After a short barrage, the mission will be over.