An old friend of one of your heroes asks for help in dealing with a Dwarven army. 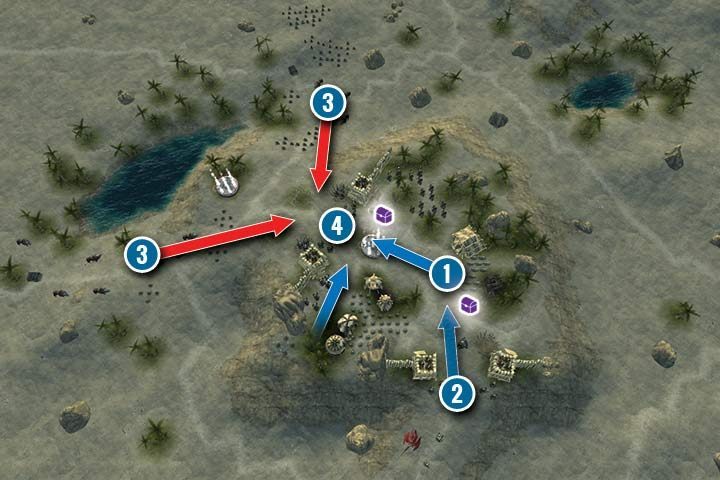 Your goal is to defend an Orc village from Dwarves. The enemy army will come only from the north. When the second turn starts, you will be able to command all allied units and your heroes including a new one - Rogdul.

Don't leave the fort (1)! This is a great defensive position with numerous ranged units on walls and in towers. A battle mage with maximum level is in the west. You can leave him there for a few turns - thanks to that no one will be able to reach the southern entrance. There are two treasure chests in the fort - a light healing potion and a scroll that can stop one enemy unit. Move the units from other parts of the fort (2) and order them to defend the northern gate. Boars of War and Warhammers are the biggest threat here (3). The Dwarven army also has ranged units and cannons but these units are at the back - they will join the battle rather late.

Make good use of the new hero's strength and abilities. Rogdul is great for stopping the enemy infantry. He can regenerate up to 20 health points, and he can freeze enemies. Orc Pikemen are great against the Boars (your units have the same attack bonus as if they were fighting human cavalry). Order your Pikemen to stand near fortified positions (4) - thanks to that they will be able to survive for a longer period of time. Don't leave your positions - it is much easier to defend yourself when your units are in the fort's gate. Make use of the terrain, abatis, and the height advantage. You can also block the enemies in narrow passages in front of the gate (the ones between abatis).

If you are worried about your units' health, keep Rogdul or any other hero in the first line and use the teleport to summon a Shaman. This unit will help you strengthen other squads. Also, Rogdul is able to both withstand a lot of attacks and stop the Dwarves from marching forward.