It is time for the second phase of the siege, which should help you conquer the Dwarven fort. 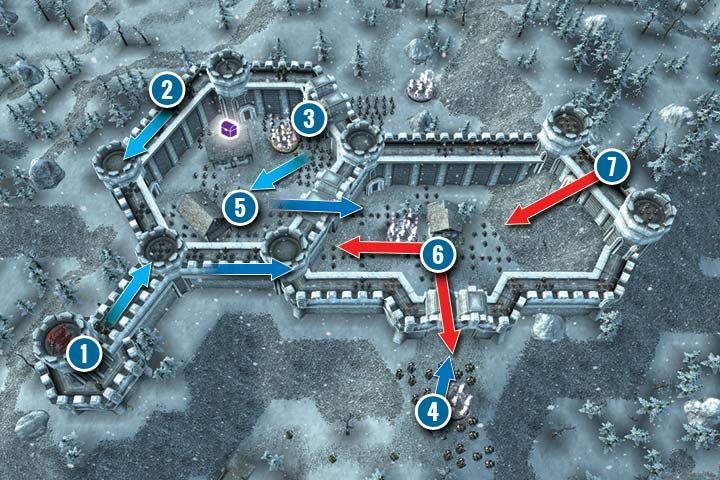 Taking the fort is not an easy feat, nonetheless, consistently eliminating enemies will eventually lead you to victory in this battle. First of all, use your dragon and its unit (1), which is in the southern tower. The Warriors are at the front line, the Mage is weakening enemy attackers, the Shaman is buffing the Warriors, and the Dragon is supporting from above. Using this strategy makes it almost impossible for enemies to defeat you. Later, you can send your dragon to help out in other parts of the map, especially in the north-west.

Vulpis and archer units are placed on the walls. Move your goblins to the tower as fast as you can (2). This way, you block the path for enemy units and secure a better position. The archers should now start attacking enemy units placed in the courtyard. Guarg, along with a moderately group of warriors, breached the gates (3). Proceed to eliminate the enemies with the help of the remaining units. If necessary, summon additional ranged units and place them on the walls.

In the meantime, a part of the allied Orc army is attacking the fort from the south (4). This army will weaken the enemy garrison, however, it will not win the battle by itself, especially if your troops won't arrive in time. You can use the portal to strengthen this group. However, it's more important to help your own units first. If you decide to use the portal, summon Mages or Shamans. Those two units are the best of what you can get for the job.

After cleaning the western part of the fort, regroup your forces and proceed to attack the eastern part (5). Meanwhile, the defending units inside will perform a counterattack (6). Luckily, there are no special units present in the Dwarven forces, only warriors, and archers. If possible, place some of your units on the walls to make the fight easier. The last part of the garrison is hidden behind the eastern part of the walls (7). Send Ildus against the enemy units located at the fortified positions. The Dragon can ignite enemy units significantly impacting enemy HP. After dealing with the final defender the mission is completed.