Your army is divided into two attacking groups heading toward the Dwarven fortress. Vulpis and Guarg are attacking the fortifications in the north. 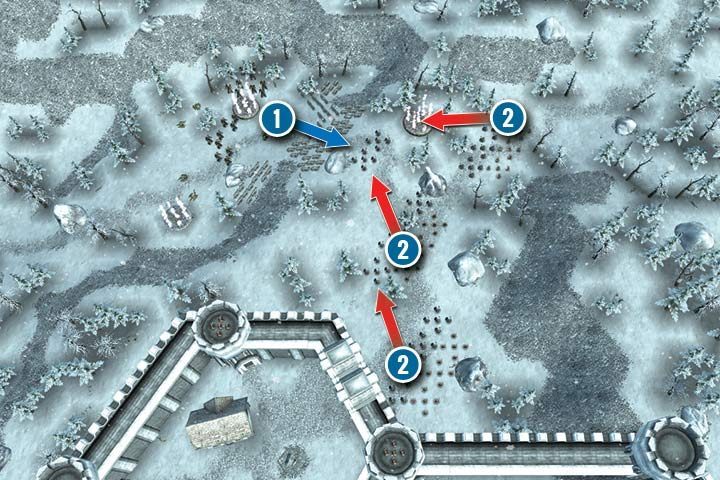 In this mission, you have to deal with a few squads of Dwarven forces. Your army is composed of a small group of Wolves, Archers, and a few Wyverns (1). Luckily for you, enemies will become aggressive only after being attacked or if you decide to approach them.

Enemy warriors are a tough nut to crack, so are the ranged units that can mow through your army (2). There are a few enemy groups on the map, and you have to deal with all of them. Use your Wolves to slow down enemies and cut off access to your archers and Wyverns. The archers should focus their fire on their enemy counterpart to reduce the danger coming from enemy ranged units. The Wyverns should attack melee units, as they can deal significant damage even if the enemy is hiding in fortified structures or forests.

It is highly important not to attack large groups of enemies; focus your attacks on small groups to avoid enemies coming to aid their allies. If all of the enemy squads start attacking, your strategy will need to change. In that case, try to attack the most overextending units and move your army at a slow pace. The units located in the fort will often approach your positions. This will usually occur during the attack on the last enemy group.