As the Greenskins start to build a new fort, the Dwarves attack once again. 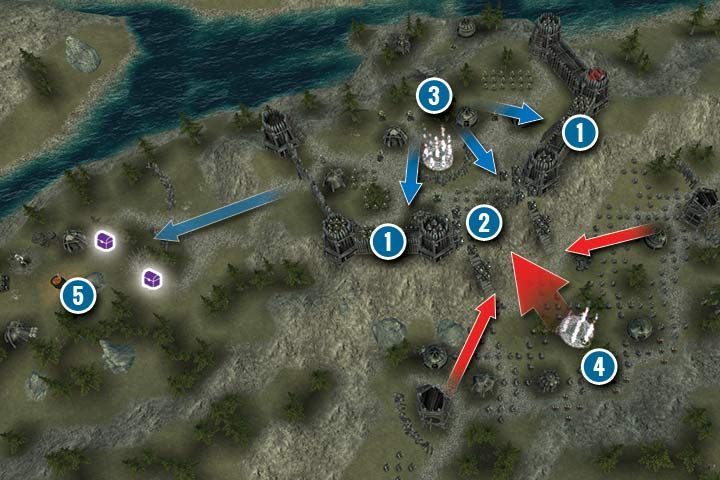 Defending Drogor is a typical defense mission. The castle is unfinished but nonetheless offers reasonable defensive value. There are some towers and walls there (1), where some archers are placed. It's a good idea to swap their positions with Mages, who will be much more efficient against enemy units.

The weakest element of the fort are the gates, or rather the fact that there are no gates at all (2). You will fight the toughest battles there. The way to the fort is narrow so use your warriors you received before wisely. Very useful units are located inside the fort (3). Shamans can buff your units with their shield spell, which absorbs damage until it's destroyed.

The Dwarven army is composed in 95% of heavily armored warriors and literally a few ranged units (4). Use your Mages to weaken or eliminate your enemies, who are the closest to the gate. If possible move them to the walls or towers, which are near the main gates. Keep an eye on your front line and monitor their HP. You can summon additional ranged units as there is little space to maneuver your melee troops there.

You can send Vulpis to get the chest in the west if you feel confident enough (5). Do not attack the camp guard, the Troll, as it will become aggressive toward your forces and you will have to fight it. On the other hand, you can use the control scroll to turn the Troll to your side. This special unit has good stats (among others, 25 HP regeneration per turn) and is a wonderful addition to your army, although just for the time of one mission. Use it to strengthen the defenses at the game. It is a very strong unit, which can withstand a lot of punishment. Thanks to this, you will be able to defend the fort with ease.