Defeating an enemy hero is a significant achievement, however, the celebrations don't last for very long... A new enemy is approaching! 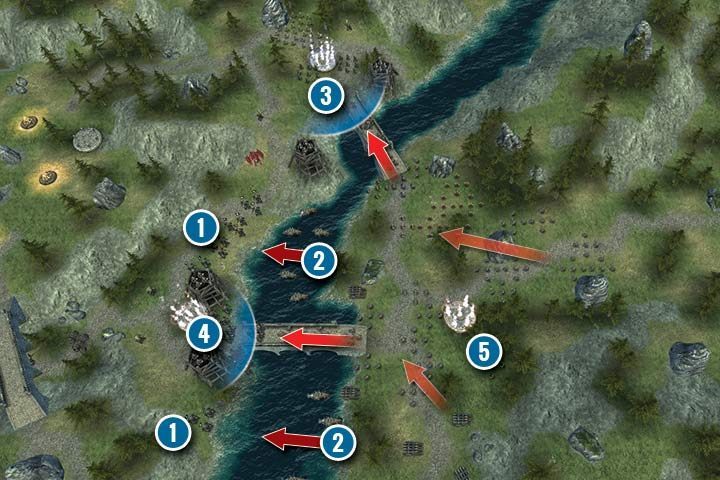 In this mission, you will face a strong Dwarven force. The enemy will come at you in two groups. There are pikemen in your army (1). Those units will stop the charging Dwarven Boars (2) and deal with them in the most efficient way. Defeating the Boars is very important, otherwise, they will attack your units from behind and cause problems with successfully finishing the mission.

In the north (3) and west (4), there are two Bridges with portals and towers. Those are perfect places to set up your defenses. There, you will be able to fend off and defeat the Dwarven army with ease. The second group of enemies is mainly composed of heavily armored units, however, they don't stand much chance against your Mages, who can quickly deal with the problem. To make things even smoother, you can attack the enemy front line squad and leave just one weakened unit in it. Then Focus your attack on the enemies in the back. This way you will make the fight easier for you and as a result, more of your units are going to survive the mission.

Additionally, use Shamans to buff the units fighting on the bridge, to protect them from losing precious HP. The standing on the tiles on the bridge grants a bonus to defenses, thus keeping your Orcs and Goblins alive is much easier there. At some point, the enemy will start using ranged units and cannons (5). You should Focus your attention on those units (especially on the siege machines). Don't forget to place your Mages on the towers or use your dragon to perform a fast raid at enemy positions.