After defeating the defenders, you will finally face Neriya. Fighting her will require using a trick... 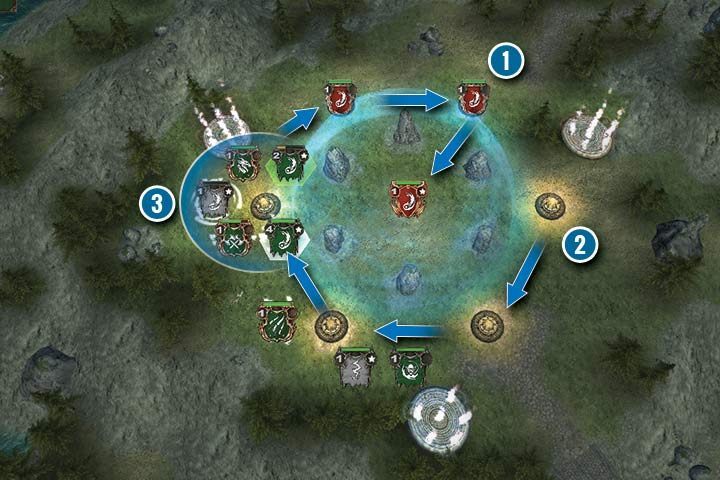 To remove the shield, you have to destroy all of the braziers (1). The problem is that every destroyed brazier brings about more enemies. If you destroy all of the braziers in the first turn, you will have to deal with a horde of enemies. The easiest way is to destroy one brazier, deal with the enemies and repeat the whole process again. This is a somewhat tedious way to deal with the problem, but at least it's foolproof. It's useful to summon additional units to deal with enemy units more swiftly.

You can also use a certain trick. Move your forces to the brazier closest to the barrier on the east. Most of your units are there (2). Before destroying the brazier surround it with your units. After surrounding it is completely surrounded, destroy it. Due to the lack of space enemy units won't be able to spawn (3). This way, you will avoid confronting most of the enemies. The only thing you will have to worry about is Neryia's attacks. Keep destroying the braziers until the barrier is no more.

Now, simply use all our your forces to attack the enemy mage. If most of your units survived, the fight will be short and easy. A Shaman will be very useful in this fight as he can buff your units for a few turns by increasing their effective HP.