After taking the lower part of the city, it is time to conquer the rest of Thealon. 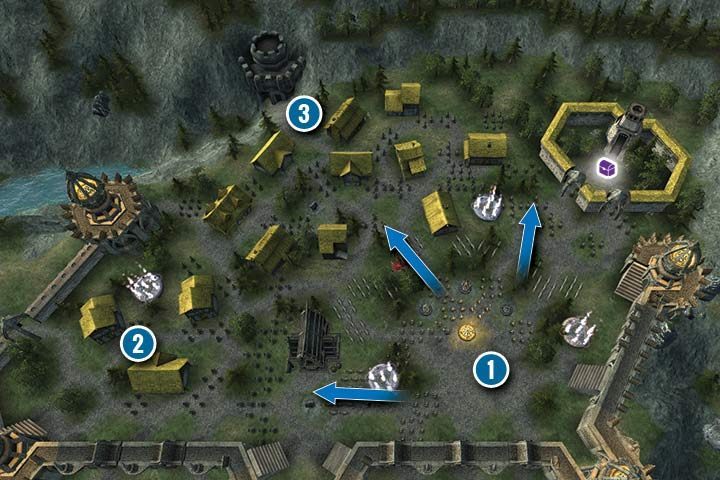 Although you are the attacker in this mission, the enemy has a slight advantage. Defeating your foes will require the careful elimination of enemy units. It is important to block choke points and kite enemies so that they become vulnerable to your distance attacks.

The mission starts at the south-eastern part of the castle (1). Although you have a decently sized army, it's a good idea to focus your efforts in one or two directions and use the remaining troops to strengthen the lines. The weakest group is located to the east. It is the least numerous and your units can deal with it quickly. You can find a few useful scrolls, which will slow down enemies, in the chest. Use your wolves to slow down the marching Shadow Warriors.

After dealing with one of the sides, use your army - especially the ranged units - to engage in a slow battle with the enemy forces. Densely placed structures and narrow passages are beneficial to armies which have a larger number of archers in their ranks as well as some more "tanky" units, who can soak up a lot of damage. You can use the portal behind enemy lines (2) to perform a surprise attack against ranged enemy units. Dominating the battlefield is crucial to success in this mission.

There will be enemy civilians running in the south-western part of the city (3); they will gather there and wait while the action develops. The key word in this mission is patience, which will come in handy while you gradually increase your advantage over the enemy forces. A hastily attack at different places at once can prove ineffective and will only speed up your defeat. Use every possibility to block enemy units while remembering to leave weakened enemy units at the front line. It's often better to wound strong units than to finish them off.