The Orcish and Goblin army has made it to the Elven city Thealon - the siege has just started. 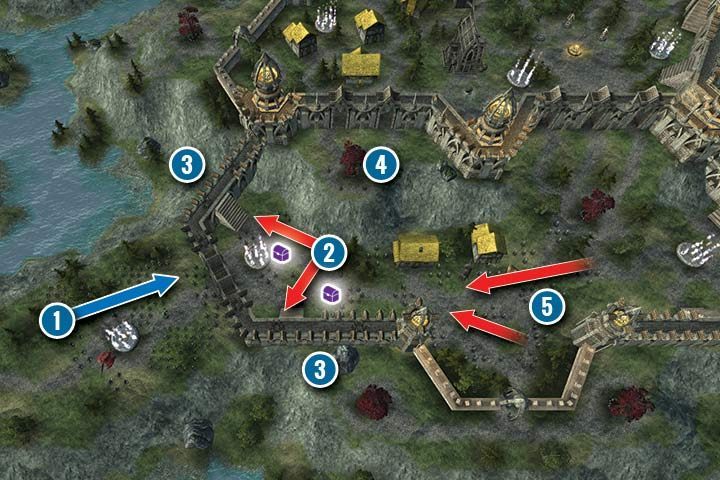 Storming the city is not a trivial task. Fortunately, you are strong in numbers and possess some powerful units as well. You start the mission west of the city gate. (1). You have a dozen of Goblin warriors and a teleport at your disposal. However, Mages are your most important asset. You have 3 of those units on the maximum experience level, which means that they are a strong force to be reckoned with. Use them to deal with most of the enemies on the walls and inside the city. The Dragon also plays an important role in this mission. He can easily fly over walls and hills to get the enemy units.

Just behind the city gates (2), there are some melee units (they will be charging at your army), archers (their job will be taking over the walls), and priestesses, who will be your first and primary target. Otherwise, taking the walls will be very difficult. Send the Dragon to the walls so that it can block the passage and attack the healers.

You can find two chests inside the walls. One contains a small healing potion and the other a shield scroll. The latter is a great spell to use on your dragon or a strong fighter, who ideally will be the one to soak up a lot of damage later on.

There are archers on the walls on both sides of the gate (3). The archers will head to that position from all the parts of the castle. To slay them you can use both your Dragon and the Mages as they can deal significant damage from afar. First, weaken the front line so that the wounded enemies block the way for the stronger units behind them.

Before you place your units inside the castle grounds, send your Dragon to deal with the enemy Mages (4). Move along the walls and attack enemy positions from the tower, then approach the mages. You can try attacking with your won Mages, however, it's best to attack with full force in the first turn. Now, continue dealing with the remaining enemies in the courtyard (5). The enemy will attack mainly with warriors along with smaller groups of medics and archers. Place the Mages on the walls so that they are out of enemy range but can still attack. Leave the Goblins on the defense at the walls and support the group with hero characters.