You have found the Orc tribe, however, they are in peril. You have to help the Greenskins against the Elves. 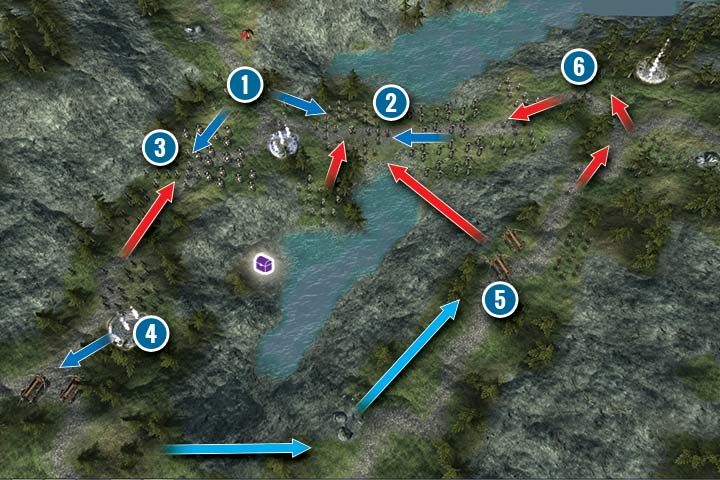 It's obvious from the beginning that this is not a simple mission. You're surrounded by Elven forces. The difficulty of this mission lies not only in the sheer number of enemy units but also their positioning and army composition. Besides a large number of infantry and archers, the enemy possesses several priestesses, who can heal enemy units. Thus, they are your priority targets. If you're having problems with slaying them, try to remember that in this case, it is always better to completely destroy at least one squad than to damage many. In other case, all your efforts will be for nothing. In addition, the enemy possesses two pairs of ballistas, which can fire at almost any place on the battlefield (you will deal with some of the ballistas in the first turns, this will be explained later on). However, your army consists only of Orcs. They have a lot of health points; they hit hard, and have useful skills. Thanks to their raw power you will deal with the Elves in no time.

The mission begins in the north-west part of the map (1). The rest of your units are already engaged with the enemy, while your hero is surrounded by infantry. Besides Vulpis and Agni, you are given a new unit to your disposal, Shamans. This is a special type of Orc mage. They deal a lot of damage, but aren't very tough nor do they have any armor. Their power lies in their special ability; they can buff a friendly unit with a shield, which has its own hit points and lasts for a few turns. Before losing health points a buffed unit needs to lose its shield first. 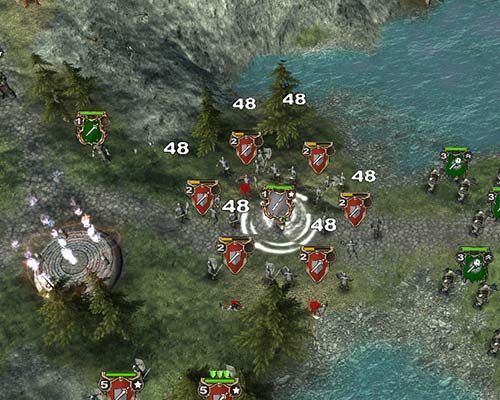 Guarg specializes in melee combat against many opponents at the same time.

Right next to the starting location, there's a new hero character, Guarg (2). He is a powerful warrior, however, he needs your support. Use the shaman's ability and grant him a shield. Thanks to this he will last longer in battle. Guarg has a special ability, which allows him to attack all enemy units around him. Every enemy hit by this attack receives the same amount of damage as if they were hit by a standard attack. Perform the attack and move in the rest of your units to finish off the weakened enemies. Later keep retreating towards the teleport until you repel the Elven attackers. 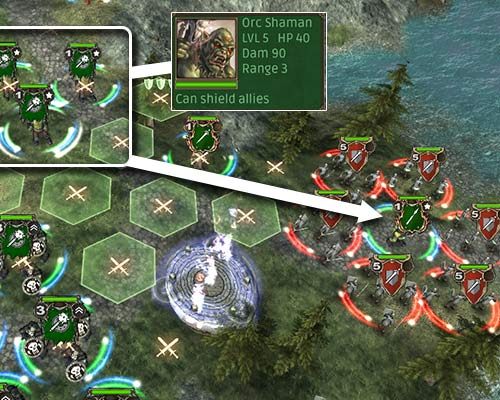 A shaman can protect his allies or deal large damage. Use his special skill to keep Guarg alive.

The southern front must be broken as first (3). Focus on the same units, and try to eliminate enemies rather than weakening them. Support units of the front line with shamans. The biggest problem here is the group of healer. Bring in Vulpis and projectile shooting units to get rid of them first. The next problem are the ballistas at the very end of this army (4). Luckily, there is a portal there. Bring in a strong unit, such as magicians or orc warriors, to approach and attack siege machines. Then withdraw them southwards so that they can launch an attack at the same time as the rest of your army, once the enemy is weakened.

Now, from the location of the southern portal (4), you can send some of your units or e.g. a dragon to the second spot with ballistas (5). Use obstacles in the field to avoid fire. After eliminating them, the skirmish in the northern part will be much easier (2). The northern group of elves also has a lot of infantry and healing units. Try to hit them from behind to prevent their treatment. Defeating last enemy units is just a formality.