Till you cross the border and meet up with your brethren, you have to deal with a big obstacle. Taking the castle won't be an easy mission. 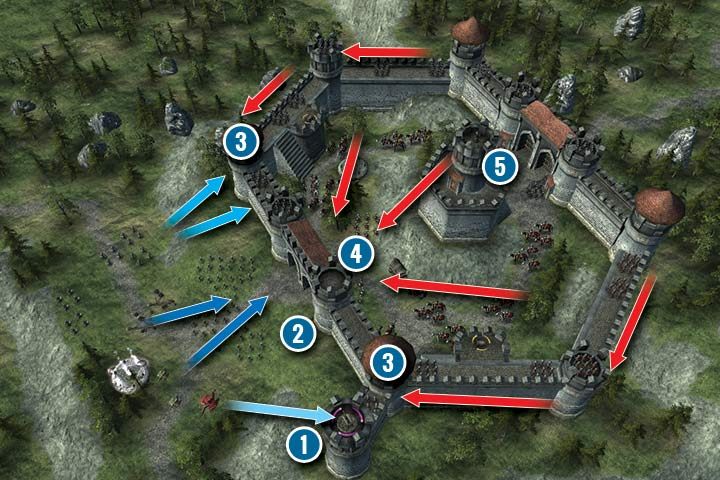 You have to conquer the humans and over their castle. The enemy hides behind high walls and is more numerous, what's more, the humans are led by a powerful mage. The enemy will send wave after wave of units making this is your only tactical advantage. Let your enemy approach you and use this strategy to choose an advantageous battlefield. You have a few battle mages, who are perfectly suited for dealing with crossbowmen on the walls and heavy infantry. You can summon ranged units or pikemen because you will face a quite large cavalry. 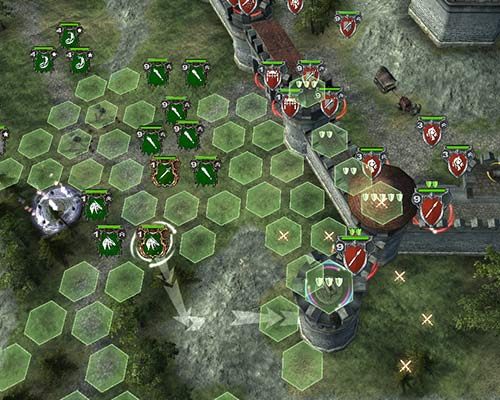 The Dragon of Agony can fly, thus its movements aren't hindered by terrain obstacles; it needs neither stairs nor an elevator to get up on the walls or towers.

Before committing to a frontal attack on the castle open the gates. Use the dragon to do this. Let Agni attack the tower near its location (1). This way, the gates will be destroyed in the first turn (2). Now, move some of your units in such a way to block the entrance. Watch out for the mage as his attack has range where the gate is. What's more, the attack deals lots of damage. At that time, enemies from the whole castle will start moving to your positions.

Try to use the dragon to secure the tower right next to the gate (3). This way you protect those places from being manned by enemy crossbowmen. These parts of the wall are stronger fortified, and what's more, they're taller than the rest of the castle. Use the high ground to your advantage and attack the units going against your army. On the northern side, send mages along with Vulpis under the walls to attack the approaching crossbowmen. If you're fast enough, you can destroy those enemy units before they can fire a single shot your forces. Next, help your infantry defend against the garrison attack.

After weakening enemy defenses and eliminating most of the archers, it's time to get inside (4). Use the forest and other terrain obstacles to avoid damage coming from the mage (5). There's a portal inside the castle, which may prove to be helpful at that time. Fast goblin units can take care of the mage before he does any more harm. It's also possible to lure him out of his tower. Sometimes all it takes is placing a weakened allied unit one hex farther than his attack range. The mage should leave the tower and climb down to the wall below. Use the dragon and Vulpis to perform a quick attack. It's best to secure the tower with the dragon so that the mage can't get up again.