Again, we are faced with the objective of taking a Dwarven fort, however, this time it is occupied by Orcs. 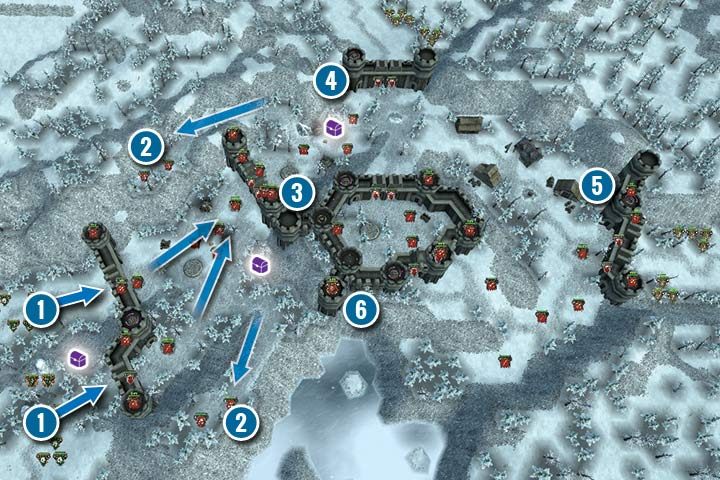 This is a heavily fortified stronghold, which is difficult to seize control of. You will fight against Orcs and encounter a few enemy mortars. Your task is not only to eliminate all the Orcs but also to defeat their chieftain (he has a long range distance attack and spends most of his time on the walls). In addition, you have to turn all the levers. 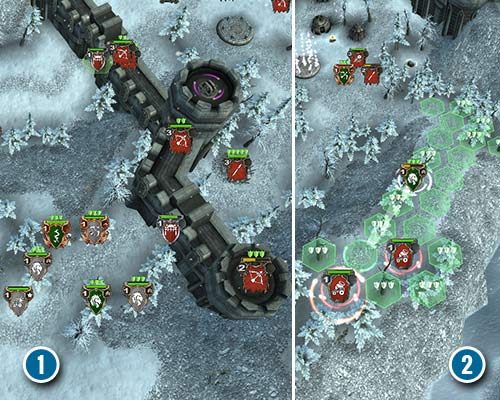 Your army starts in the west (1). It is mainly composed of unicorns, ballistas, and mages. Sylvius and Arcaena start in different places. Arcaena has it easier to break into the first part of the fortress if she destroys the gate first. Sylvius can do the same, however, he will quickly find himself in the firing range of enemy mortars. There is also an easier way. All you need to do is to loot the first chest and use the scroll with the skeleton. If you summon a skeleton right where the lever is, the gates of the first defensive wall will be opened. Before you enter with your unicorns, wait till the pikemen are in range of your ranged units.

Dealing with the mortars is quite simple if you have a unicorn with full health (2). Just send it towards the siege machines, but in such a way that it is constantly under the cover of the forest. This way, it will barely feel enemy attacks.

Before approaching the second wall (3), eliminate the enemies between the first and the second defensive wall. Use the range of your ballistas and the power of the unicorns. Try to avoid the mortar area in the north (2). Until you reach the gate you can't get to them. There, you can also use the skeleton scroll in two different ways. Move towards the forest at the hill, where the mortars are placed and use skeletons to destroy them. It's best to summon the skeletons on the tower with the lever and open the gate (3). You'll take care of the siege machines later (just as before, you'll send a unicorn to their location). Now, as fast as possible, move your heroes up on the walls. Use the rest of your units to eliminate nearby enemies.

Now you can storm the main castle or summon allies. The northern wall is poorly guarded, just next to it there's a portal and a chest containing another skeleton scroll. You can send your hero or a different infantry unit to activate the lever on the northern tower (4). Friendly squadrons will join your cause and fight on your side. You can make it easier for them by opening the gate using a lever in the main castle.

In the meantime, head towards the wall in the east and open the way for new allies (5). From this point on, taking the castle is simply a matter of time, if you help your allies get inside. Defeating the Orc chieftain (6) is somewhat difficult. He doesn't come down from the walls, he is very tough and has a really powerful distance attack. Put your heroes on a tower and remember to keep healing units close by. Summon mages, so they can weaken him; and a ballista, to deal serious damage. Your allies can help you now. They will draw his attention and take damage, although, they will often obstruct your way by doing so.