Your objective is to regain control over a fortress, which fell to the Dwarves. 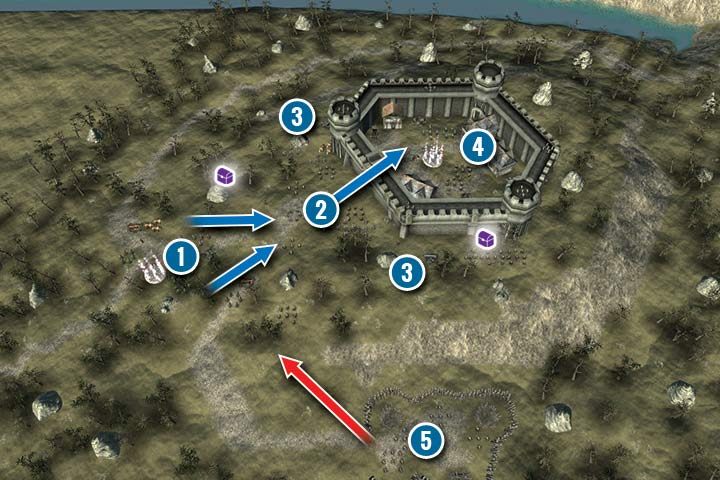 This is a rather straightforward mission. The objectives are defeating the garrison and taking the Dwarven fort. You main forces are to the west from the castle (1). You can summon additional units, however, this option is best kept for later use. Loot the chest, which is nearby. It contains a scroll increasing attack power and some gold. Inside the castle, there are two shield scrolls; and at the walls, there's an elixir of regeneration. Those can come in handy during this mission, you can also keep them for a different occasion. 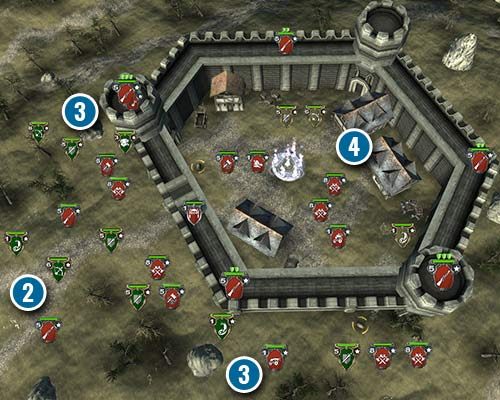 Some of your units are engaged in battle in front of the castle and are mixed with enemy units (2). Their main objective should be eliminating the weakest and the most dangerous enemy units. There are Dwarven cannons just next to the western tower and near the south-west corner of the castle (3). If you don't deal with them quickly, your units occupying that space will get obliterated. Later move on to the ranged units and join the rest of your army. Use mages to weaken the ranged units on the walls and after that attack targets in front of the castle.

After a few turns, prisoners from inside the castle will join the battle (4). Those units fight the enemy as your allies, however, you don't have full control over their movement and choice of targets. It's also a good idea to use the portal and summon units to eliminate siege machines inside the walls, especially the mortar. If possible, move some of your ranged units to the top of the walls. This approach comes in handy when defending against enemy counterattacks coming from forces stationed south from the castle (5).