Now, it's time for the final encounter against Vivric. 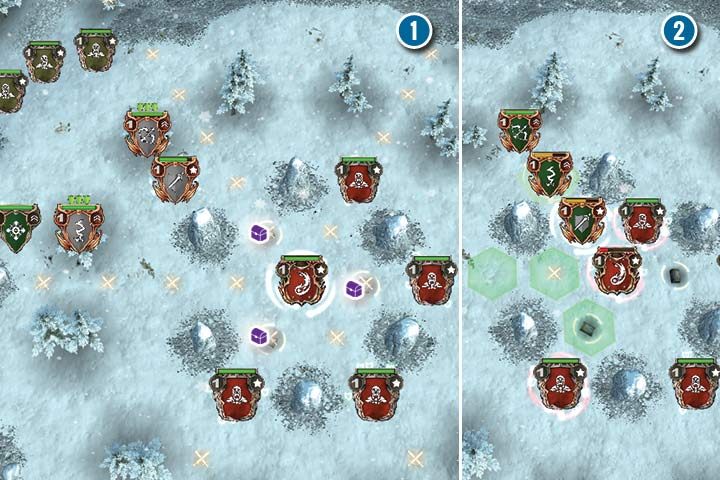 Defeating Vivric is easier than the previous battles - especially on normal difficulty - he is not a very formidable foe.

Again, you will use Arandur's skills to get rid of the golems' shields, and then use the rest of your heroes to eliminate the golems. Keep your heroes out of Vivric's range (1). This way you won't have to be healing them constantly. You have to slay at least 2-3 golems on one side in order to face Vivric without problems. You can also get rid of all of the golems, however, this is not necessary to attain victory.

After clearing the way to the enemy hero, first, attack with Arandur, and position the rest of your heroes on suitable positions just behind him (2). Vivric possesses a divine shield which regenerates every turn. He tends to attack Sylvius first (if you haven't improved his stats), as he can only withstand two attacks. Change his position every turn so you can heal him. In this mission, Arandur is using the regeneration potion, but he also cannot withstand too many attacks. When your heroes get critically damaged: retreat, heal, and resume attacking.

At the end of the mission, you can choose to either spare Vivric (end turn; you can use this time to loot the chest) or kill him (deal the killing blow using any of your heroes). Regardless of what you choose, the mission ends in a success and the campaign is finished.