Arandur finally joins up with Sylvius and Arcaen. Their task is to find Vivric. 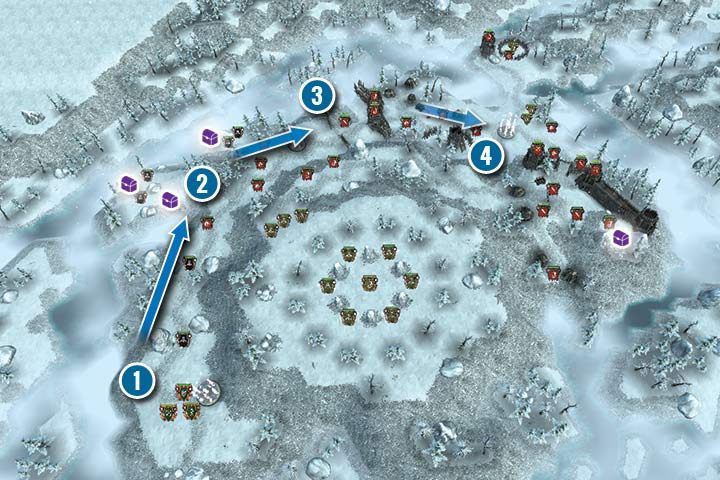 In this mission, you will mostly be commanding hero units. The largest challenge is going to be facing the golems (black banner) and wyverns, however, Arandur's new skill will bend the rules of the game.

You start in the south-west part of the map (1). The first enemy you will encounter is a frost golem. Every golem possesses a powerful shield, which makes them invulnerable. Although Arandur's attack doesn't deal damage, it removes the shield effect and makes the golems vulnerable to other attacks. Now Sylvius and Arcaena can strike the golem down. Deal with the next golem the same way. In front of you, there's a wyvern; your heroes can slay it with ease. Arandur starts the mission with a powerful potion of regeneration, in addition, he is resistant to magic, so it is easier for him to take punishment from enemies.

You can slightly stray from the path to loot some chests (2). Before you do this, eliminate the approaching wyverns. Arandur can use his skills on allied units to remove negative effects like freeze, or acid DOT effects. 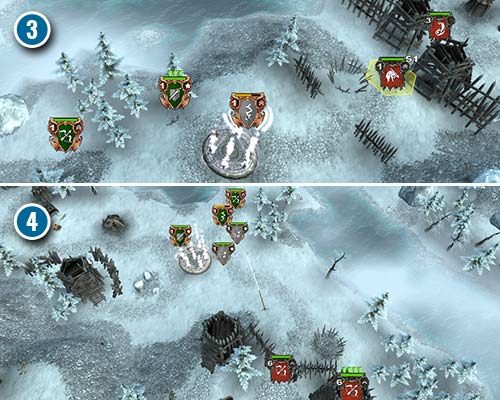 Now it's time to get past the first gate (3). You can easily manage the defending units by trapping an enemy with Sylvius' attack, while the enemy is between the gates. Use the fortifications to your advantage and wait till the enemy comes down from the tower. When that happens, send your heroes to eliminate the ranged units on the towers in the same turn. Now you can place your heroes on the higher ground and repel the wyverns' counterattack.

The last part of the mission is defeating enemies in a small camp to the north from the portal and in the garrison to the south. (1). You can summon additional units, however, we advise you only summon the priestess, and what's more, only when you really have to. At this point, ballistas and a mage join your forces. Siege machines have the goblins on the walls in range, which makes them (the goblins) an easy target. It's enough to position your whole army there and wait until enemies start mindlessly charging at your positions.