It's time for a final battle with Ovrin. The commander of the dwarf armies has no place to escape. 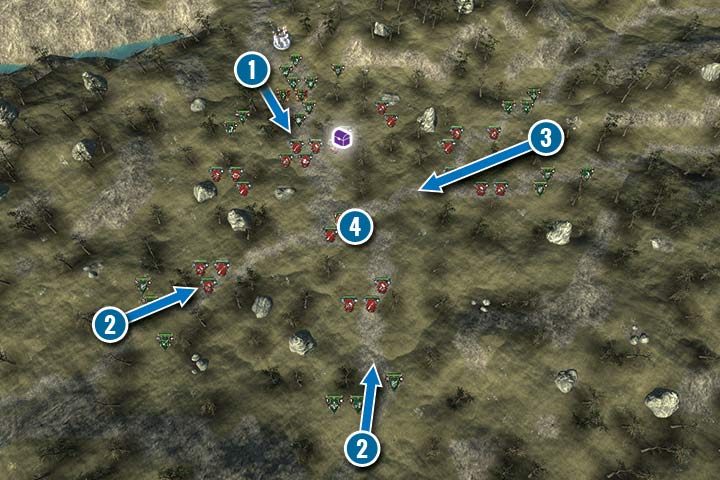 The situation on the map does not look very rosy for your opponent, although it does not mean that it will be easy to beat him. On the map you have many troops that attack from all directions. In some places, you will have to deal with smaller or larger groups of enemies. It is a good idea to use your forces at the maximum, so that your main army will have fewer problems afterwards.

In the north your heroes with most of the troops are residing (1). Here is also the strongest resistance from the opponent. With Sylvius you should try to immobilize an enemy wild boar. It's hard to kill, so it's worth leaving it for later. Aim ballistic missiles at the shooters first, then at the berserkers, and finally at the armored warriors. They are able to knock down poorly armored riflemen's troops with one shot and significantly weaken the berserkers. Then use the rest of your strength to attack such troops, only using infantry to fight dwarf warriors. They merely inflict sensible damage on these troops. Additionally, it is worth to weaken them with the help of magicians

The Western and Southern groups are confronted with very small units (2). You are able to defeat them, although you have equally small units. Start by eliminating the marksmen and then focus on the warriors. Take care of your distance units and your priestess and keep them behind the shadow warriors. This way you can defeat your enemies, although it will take several rounds.

The group in the east is a bit larger than in the south and west, but has to fight with more enemies (3). You won't be able to win here, so try to eliminate as many enemy units as possible. If your opponent gains a lead, start to withdraw eastwards. The dwarves will start their chase, which will pull them away from the main battle and make it easier for you to fight the scattered enemy.

Orvin is at the center of the battle (4). He will not leave his position and he waits until you attack him. Bring as many troops as possible into the area before you start the attack. Ballistas and mages will be very useful here. He has a strong attack, so watch out for your heroes. Sylvius cannot immobilize him, but you can surround him with infantry and archers. Once the ring has been created, he won't have any opportunity to escape. Then the archers and projectile shooting units will easily eliminate him. Now it's time to get rid of the rest of the enemy units to win the mission.