Although you have made it to Orvin's encampment, he managed to escape. You have to eliminate his forces before approaching him. 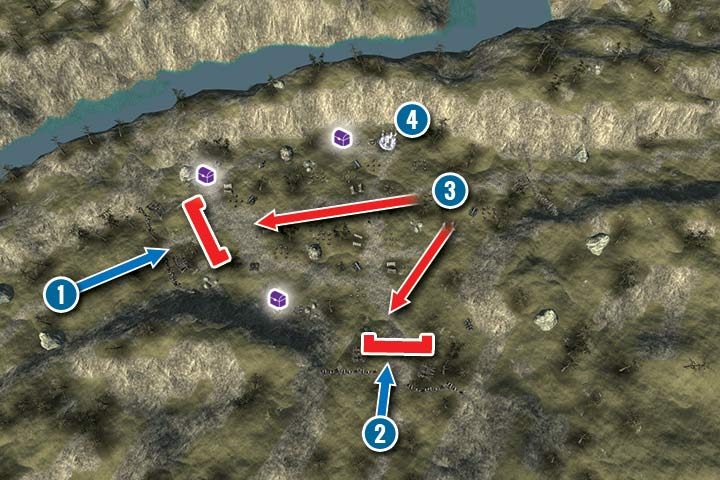 Taking the enemy encampment isn't as easy as it may seem. The moment you unleash your attack, enemy support units will come to aid their brethren.

You start in two separate places. Arcaen's squad is in the west (1); use it to attack the first enemy position. Use your hero and mages to eliminate guards on the towers. There's also a mortar nearby, which should be destroyed using mages. Don't try to push through the entrance because there are many units there. The camp gate is a good spot to defend against enemy counterattacks. There's an open space in the camp, which can harm a tactical approach. Mortars and cannons are scattered across the camp, which makes it difficult to simply storm your way inside it. 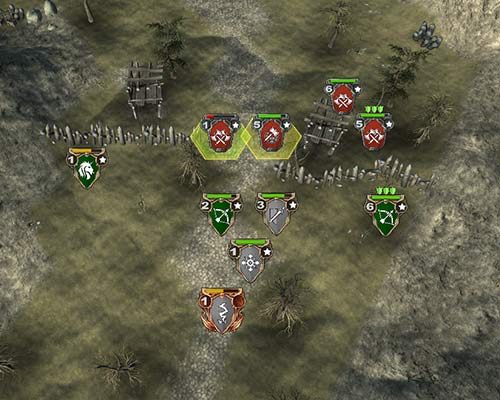 Sylvius' squad (2) is south from the encampment. Eliminate the guards at the gate but don't pass through. The placement of this group is less fortunate than Arcaen's. If you go through the gate, you will be in range of cannon and mortar strikes. Additionally, enemy support units (3) attack the closest targets, which are Sylvius' units. It's best to hold the choke point and stop enemy units using Sylvius' while the archers deal damage and reduce enemy count. Sometimes it's better to attack your enemies from a distance, especially those behind the first line of units which are being blocked. It's better to maintain this "barricade" than to destroy it by attacking those units first.

When most of the units from the camp start moving towards your position, you can try to make a diversion with a smaller squad(4). It's best to summon unicorns, which move very quickly and have high chances of finding and eliminating enemy siege machines. First, take care of the mortars, then the cannons. The first can attack units ignoring terrain obstacles. After that, take care of the cannons by approaching them from the safe side, where they can't attack your units.