The chase after Orvin is in full swing. He is in possession of the only piece of evidence that can convince Arandur to join under arms. 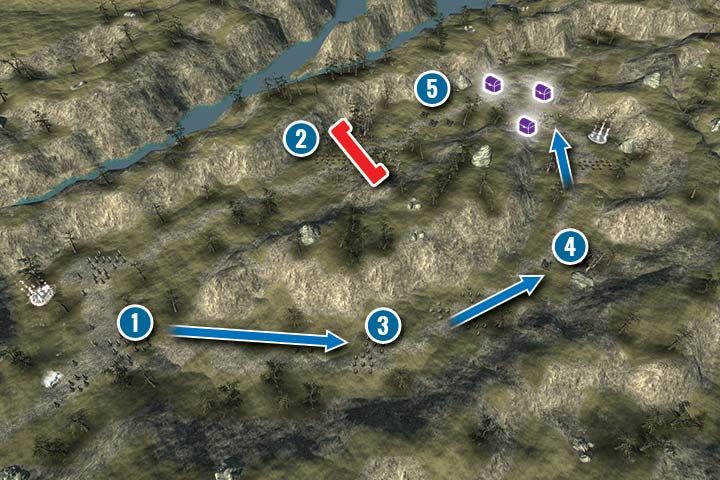 At first glance, this is a very difficult mission. The enemy has almost triple the army size and elite units, which are stronger than their elven counterparts. You start the mission in the western part of the map, right next to the portal(1). This is not a good place to attack the enemy. The enemy possesses a large number of infantry, which you have no chances against (2). What is more, there are a few mortars there, which are the biggest problem while attacking this barricaded position. You will have to bypass these enemies.

Take the southern route, which is guarded by small groups of dwarves (3). Berserkers can do a lot of damage, however, Sylvius should keep them rooted. If you are facing more than one enemy group, pick the one, which is in front of the others. Thanks to this the rest of the enemy units will have to walk around and this will decrease their leeway.

If you encounter an enemy mortar (4), use your fastest units, which are best suited for dealing with enemy fire: unicorn or Arcaena. The ranged units attacking from the tower can be easily dealt with by using the aid of Sylvius. Their range is short so you can eliminate them easily after immobilizing them. 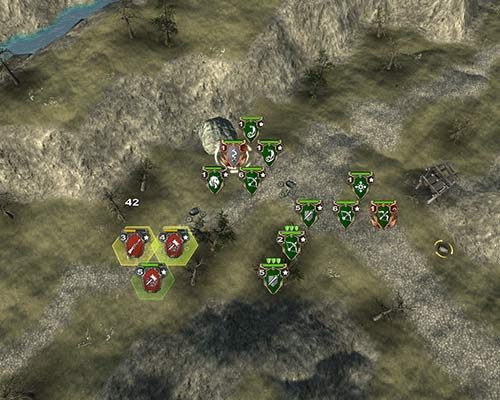 Sylvius is very efficient at stopping attackers. He can root them in place and create a barricade obstructing the way for charging enemy units.

It's time to attack the main cluster of enemies (5). The mortars will often approach you position by themselves. You have to be vigilant and fast so that they don't obliterate your units. The unicorn or hero units might come in handy in this situation. The closer you get to your enemies the more troops are sent at you. Destroying the siege machines is very important, in other case, there's going to be a problem with repelling attackers.

Use your archers and mages to attack berserkers and ranged units; the infantry should be used against heavy armored Dwarven warriors. Squad after squad, eliminate your enemies. Use the woods and don't charge mindlessly at your enemy, as this may provoke the whole enemy forces to perform a massive attack. In case of difficulty, you can use shield scrolls hidden in nearby chests.