You are attacked by sneaky dwarves, who want to get Silverwing. 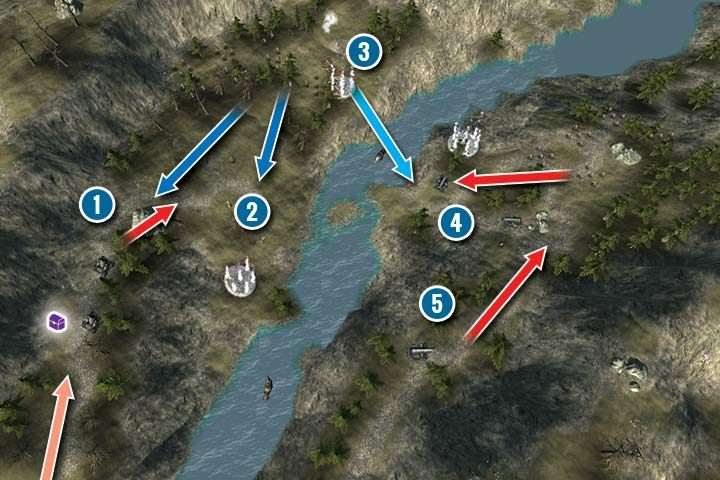 Although the enemy has an advantage in technology and sheer numbers this is a rather easy mission, on the condition you approach it in a certain order. You start the mission in the northern part of the map, next to the portal. This is a good defense position, especially thanks to the ballista, which is perfectly positioned.

First of all, focus your efforts on destroying the mortar positions in the north (1). It's best to send Sylvius and the unicorn. These units are fast at approaching enemies. The unicorn can endure a lot of punishment coming from distance attacks. In addition, there are a lot of woods there. The unit is also capable of self-regeneration, making it a perfect candidate for the job. After a few turns berserker squads will arrive. Sylvius' task is to root them in place.

Secondly, keep an eye on who is trying to cross the river (2). First, use your ballista (3) to destroy the cannon on the other side of the river. Then, eliminate the ranged units. You don't have to reposition your units, simply let the enemy approach your position. Keep your units out of the range of the cannons. Eliminating the battle boar is a job for Arcaena the rest of your units. Try to kite it closer to your position but be wary of the catapult. You won't have a priest in this mission, so you can summon her using a portal.

There's a large cluster of cannons and ranged units on the other side of the river. (1). The Dwarven army will be hunting you. Just let them come closer. The cannon located on the high ground (5) can attack most of the positions on the other side of the river. However, if there's nothing in range and the number of Dwarves declines, it abandons its position and proceeds to attack. If for some reason this doesn't happen, send the unicorn to destroy it.