Sylvius and Arcaena are hunting Silverwing. They find her in a gorge near Elunore's stronghold. 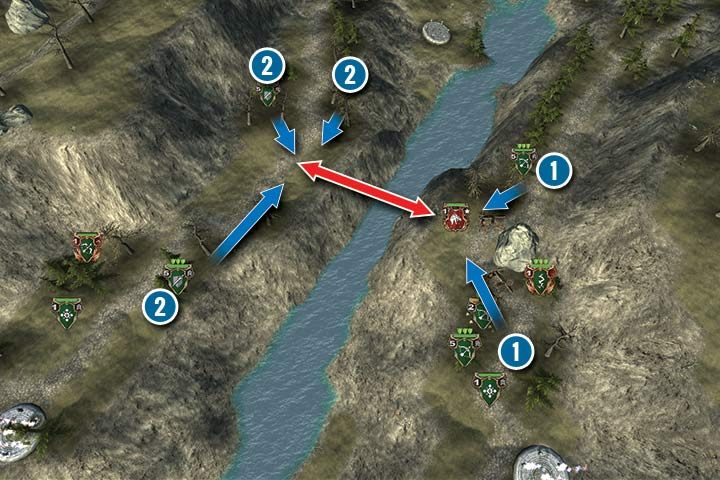 Slaying the wyvern is rather difficult, especially since, you won't be able to summon additional units. The wyvern will move between two points. When it lands, it will spray acid over all the units in range, then, it will perform a normal attack. Next, it will continue fighting for a couple of turns and fly to the other side of the canyon. When there, it will attack all units in its range and continue attacking for some time, after what, it will fly back to the other side.

There are many hiding spots on both sides of the valley. Use the woods and Stones to hide your units before Silverwing arrives. On the right side of the map, Sylvus along with the ballistas and archers await the wyvern. (1). Move your units behind the forest, so that the wyvern won't be able to spill acid over any of them. Then, advance with your archers and ballistas. Try to place one archer unit with full health close to the wyvern. Then her regular attack in the next round will reach the archers, not the ballistas. Such attack will cause more damage (reducing the number of archers decreases their combat value).

After the wyvern flies off to the other side, hide your units. Use the same tactics on the other side (2). Hide Arcaena and the infantry in the forest, however, don't position them on the outskirts. Staying deep in the woods will protect them against acid attacks. Now simply get closer to the wyvern and keep attacking until it flies away. If you're having trouble positioning your units, it's best to place them the same way as depicted on the map above.

After depleting most of its health, the wyvern will fly away to the north. Your units will receive a speed bonus for the next few turns. Move your small army north and wait for the wyvern to attack. From this point on, it will only perform normal attacks, which makes the fight much easier. Send all your units, use the forest for cover, and keep the ballistas at a sufficient distance. This way you will swiftly deal with Silverwing.