Sylvius is heading to Elunore to give the acquired artifact to Arandur. However, an unpleasant surprise awaits him at the spot, Silverwing. 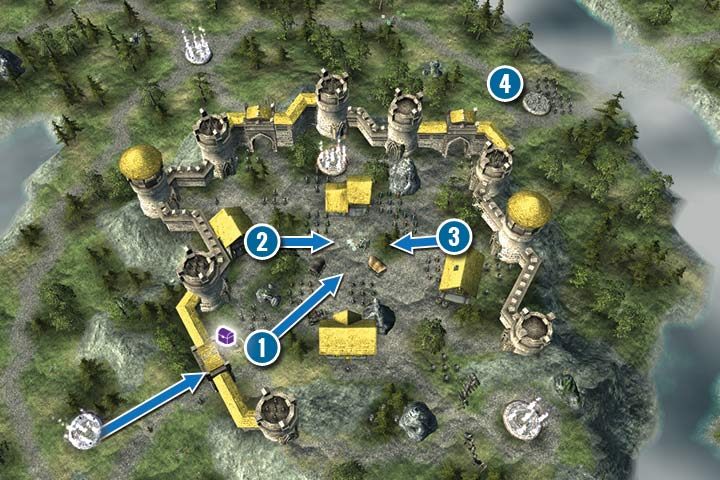 A difficult challenge awaits you in this mission, slaying an adult wyvern. The wyvern is a very strong and unique enemy. Although, you have a large army at your disposal and the enemy has only one unit; it's not going to be an easy task. Your strongest assets are Arandur, Sylvius, and the priests, who will be constantly healing your units. After the first turn, you will gain control of the villagers. Take them outside of the town walls and try to restore health to at least one of them until the acid stops having an effect.

Silverwing possesses a large health pool, regeneration, and a powerful attack. Though the attack doesn't deal damage, it inflicts all enemies in range with the corrosive acid effect (affected units lose 25 health points per turn). The key to success here is to properly position your units and use the healing potential of your priests. In addition, use Sylvius' skills to hold the enemy in place. The wyvern doesn't move that much, however, it may sometimes flee to an unsecured tower.

Arandura and the sword he has recently received. Thanks to it he can not only remove negative effects from allied units but also grant a special buff giving magic and effects resistance. Buffed units will no longer be vulnerable to acid, though they will still receive attack damage. Position Sylvius in the woods in the castle so that he can last longer without healing. 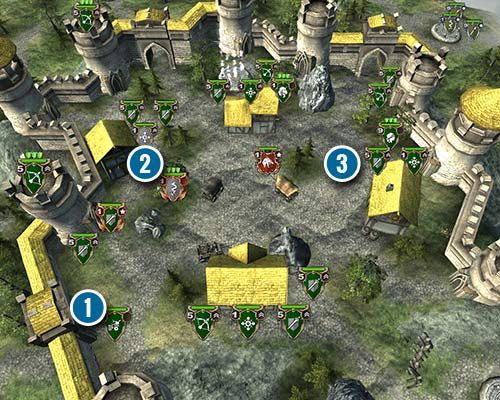 Position your army beyond the wyverns attack range in order to prepare for the proper attack. Use the woods and special skills to weaken your enemy.

It is a good idea to summon additional units in this mission. Your heroes start in the south-west part of the castle (1). It is also the only place, in which the ballista can reach Silverwing, they will be out of her reach. Just on the left from the wyvern, in the woods, there is a good spot to place your unicorn and distance units (2). The unicorn has a large health pool and regeneration. There, it can gain momentum and deal lots of damage. On the right of the enemy, there's a forest (3), from which your infantry can perform attacks. Trees obstruct the field of vision, so you can put a medic close to them.

The key to success is utilizing Arandur and depleting the enemy's health bar at a constant rate while keeping it in one place. After managing to burn down about 50% of your enemy's health; gather up your army and attack the wyvern to finish up the encounter quickly.

After the fight is over, the wyvern escapes but a human mage appears (4). You will receive a special premium unit under your command. The hunter will deal with far away targets easily but keep in mind that he can't move and attack in the same turn.