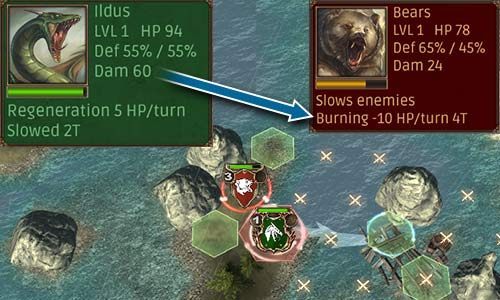 The dragon Ildus is your first hero in the Greenskin campaign. It is a powerful beast, with high amount of health and tough armor. It can deal a lot of damage, but has attack range of only 2 fields. It is distinguished by several other features: it can move up to 5 fields and ignore many terrain obstacles (e.g. hill slope fields, which other units cannot cross) or fly directly onto walls or towers.

What's more, its attacks set enemies on fire (dealing 10 damage per turn), and when the target dies, the fire spreads to adjacent enemy units. This skill set makes Ildus a very dangerous and versatile creature, ideal for attacking large enemy groups (to make full use of the fire effect) or hit-and-run tactics - destroying enemy siege machines, medics, or other dangerous units.