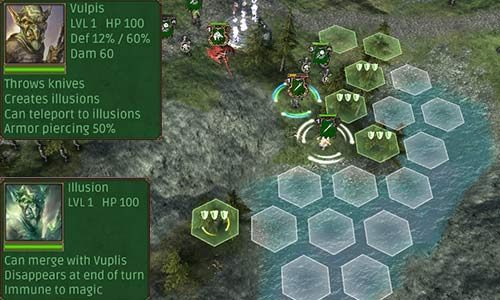 Vulpis is an unusual hero. who can be deadly on the battlefield. He is able to move quickly and throw his knives at a distance of 3 fields. This makes him a very dangerous enemy. He's initial armor value is not high, although he has excellent protection against ranged attacks.

His biggest advantage is the way he moves. Vulpis can create illusions when he leaves the field, on which he started the turn. After moving and attacking, he can go back to where he left the illusion. What's more, he can also move the illusion to another place and then move back. This makes him a very mobile and defense-focused unit. He can attack a strong enemy and escape avoiding enemy attack in the next round.