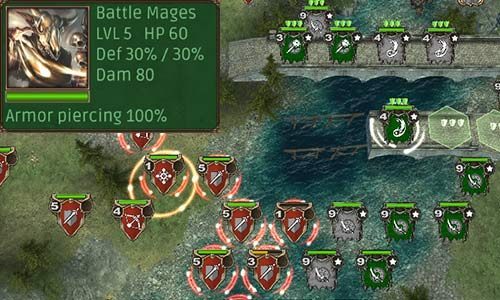 The mages of each nation are unique and powerful units. The goblin version is very strong, especially after it has been upgraded to higher levels. It is worth investing in upgraded mages. At first the unit deals 30 damage, but eventually it can deal as much as 80. The biggest advantage of this unit is that it ignores enemy armor when attacking. This enables you to quickly knock out even strong units in fortified positions. It is the most dangerous unit during a siege. It has an attack range of as many as 5 fields, although it must see the enemy (as opposed to human mages). It is the best unit to fight heavily-armored enemies. The mages have very few health points, and the unit consists of 3 mages (4 at level 5), which means that the combat value of the unit decreases as it takes damage.