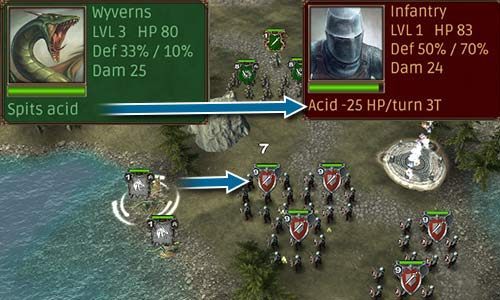 Another unique unit in the army of orcs and goblins. It does not have much potential, although it is characterized by a large number of health points. It lacks armor, speed, and deals little damage. It is a specialized unit that shines when taking on armored or fortified enemies. Its special skill is acid spitting. Each of its attacks covers the enemy in acid, which deals the unit's basic damage value per turn to the enemy (not modified by, for example, scrolls). Acid ignores armor and all other effects, so that the victim dies slowly, despite the armor. The effects do not add up (although the duration counter of the effect can be reset), but can accumulate with dragon's ability to deal damage with fire.