Green-skinned troops have fallen into disarray! The Elves have prepared a counterattack on the settlement, which has just been conquered by your troops. 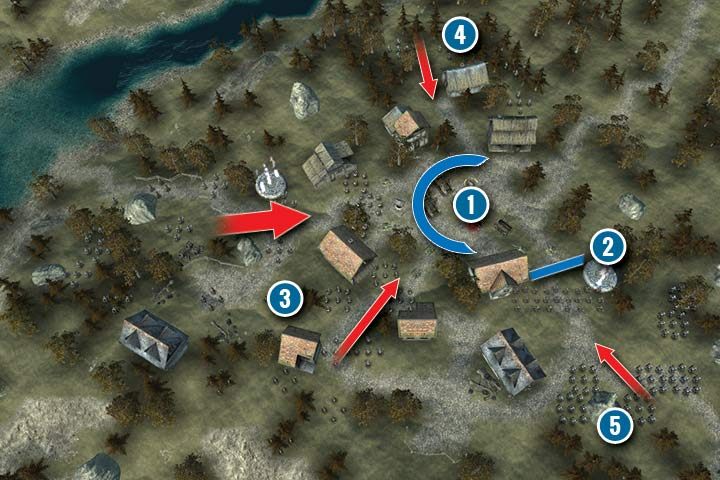 You start the mission on the same map as the previous mission. This time, you have to face a large army of elves attacking from many sides. Your troops are located in the center of the map, in the village's main courtyard (1). You still have two catapults under your control, which will be extremely important in eliminating enemy units. Firstly, attack the archers in the open air, because one catapult attack should destroy the unit. If you can't attack them, target the infantry, which is the closest to your position. There is also a chest here, with a scroll of lightning.

Nearby there is a second line of defense with a portal (2). It is worth to summon additional units, e.g. orc warriors, archers, magicians or shamans. Magicians can deal considerable damage, and they also ignore the armor of units. Shamans can strengthen your troops with a special, magical shield, which can take a maximum of 40 health points for several rounds and then disappear. This is a great way to strengthen your weak troops or heroes (and in the case of this mission, a catapult). The wyverns will be extremely useful for gradually weakening the close combat infantry, but they need protection for their own ground units.

The elves' main army is coming from the west (3). It is a legion, although it consists only of infantry and archers. The only advantage on this front line is the large dispersion of formations. Groups of units will be coming at intervals, so you need to eliminate them on the fly. Otherwise they will attack in a group, so keep in mind that you are unable to counteract the attack from several sides at a time in the first rounds of this mission. Try to eliminate archers first. They have a long range and can attack even after moving.

In the north, there are several infantry units lurking to start an attack (4). You must eliminate them quickly enough to prevent them from endangering your catapults. This will also protect the north side and focus your attention on the rest of the battle lines. Wait for warriors to leave the forest and hit them with heroes or use a catapult.

On the position with the portal (2), the elves' infantry units will start an attack. Be careful, they're supported by the hero (5). It is a very big challenge, but after a few rounds he will withdraw from the battle. Unfortunately, he will be able to deal damage and immobilize some troops. After the hero withdraws from the battle, use your troops and Vulpis or the dragon to eliminate the enemy's infantry. Wyvern are extremely useful here. Remember to attack different and various units - not the same ones. In this way, their special skill will work on a few units and after a few rounds they won't be a problem.

In case of problems with the completion of this mission: