On your way there is the settlement of Myrefall, which is home to the human army. You have to defeat them in order to go further. 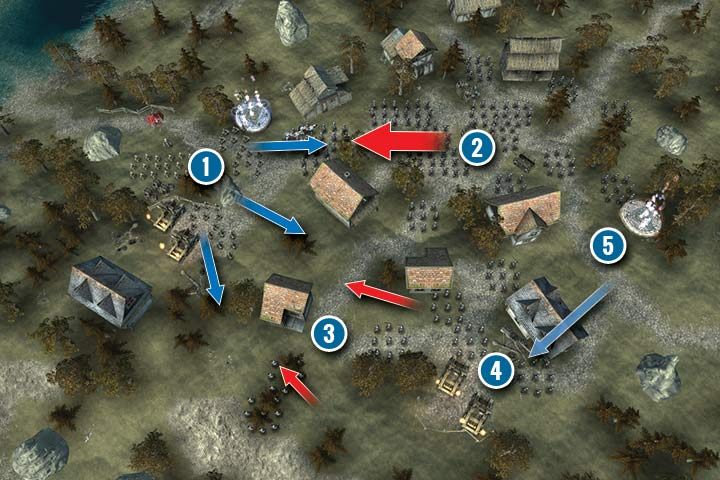 In this mission you will receive two catapults. These are strong siege machines, available to the factions of the human empire. They will be very useful in eliminating enemy units. They can deal heavy amount of damage to troops in the open spaces.

Your troops are located in the western part of the village (1). There is a portal, several infantry units and a catapult. Catapults have quite extensive range of fire. Try to maintain the line between the houses, right next to the portal. Most of the opponent's forces will come from the main square of the village (2). Several militia units will attack from the south (3). Leave a few units to protect the catapults or move them closer to your units.

The biggest problem in this mission will be Crossbowman, due to their range and number. The militia doesn't have much force to break through and you could block enemy units most of the time, while catapults and other units would destroy enemies from a distance.

At the southern end of the village, there are another two catapults you can take over (4). You need to get close to them so that they are under your control. You can use the portal in the east to quickly bring in at least one unit (5). It's worth doing this when the enemy comes close to your main army. He will not be able to return on time and destroy the catapults - these will shoot at the incoming enemies. You can also take over the catapults, just to divert attention from part of the enemy's army. The opponent will throw himself at the siege machines and divide his army. Fighting smaller groups of enemies is easier and will reduce your losses.