On their way to the Orcs lands, the goblin army must cross the Human lands and deal with their forces. 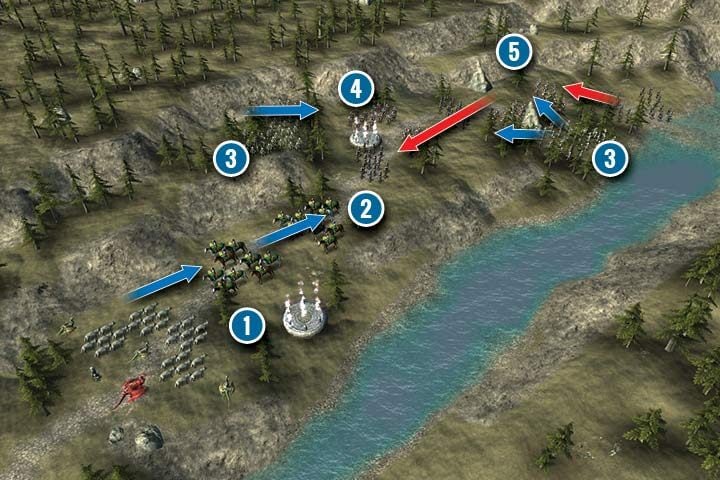 This isn't a difficult mission - it introduces changes made to the wolves. These animals have received an ability that slows enemies down for a few turns. This ability is especially useful against units that can use Charge.

You start your missions in the south, right next to the portal (1). Just opposite your troops, an enemy cavalry is waiting (2). You must act quickly to ensure that their charge does not sweep away your troops. Attack the first group as soon as possible, surround the riders, and try to weaken more units. Agni and Vulpis are best used for attacking the second line of the cavalry.

Use wyverns to attack already weakened units, which have about 30 points of life. After the attack they should be under 25, so the acid will finish them in the same turn. You can also attack the healthiest units. This will make it easier to fight your opponent in the next round.

When you stop fighting the cavalry and come close to a hidden group of goblins, both units will become active and start fighting the enemy as your ally (3). You have no control over them, but they will actively fight against the enemy. You can make their task easier and seal people's destiny by supporting your allies. Use the second portal (4) to summon additional units if the northern group of allies fails.

The enemy has last units on the river (5) that are heading towards you. Sometimes the opponent manages to win against the goblins in this part, so you will have to face them anyway. Most of the time an ally may lose the battle, but it significantly weakens enemy units. It is enough to deal with last enemy units and complete the mission.