The two heroes escape from the region endangered by flood. Vulpis will decide to free the other Wyverns. 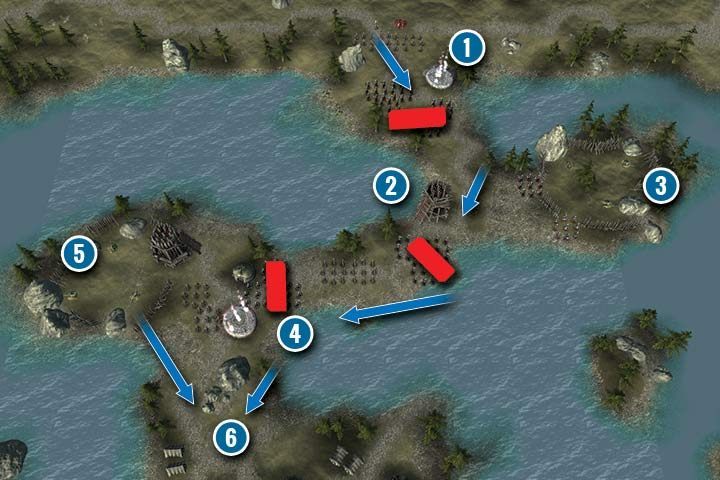 In this mission you will learn how to use Wyverns better. You start in the north (1) and your goal is to eliminate enemies and free the remaining Wyverns. Attack the incoming enemies as fast as you can and try to protect the two Wyverns. They will be very important during the fight with heavily armored infantry.

Wyverns are a specialized unit. A squad consists only of one unit which means that losses won't have impact on damage dealt by this unit. They don't take a lot of health points but a Wyvern's strength lies in its special ability. After attacking, they inflict a special effect that deals 25 full damage per turn (they bypass armor and other defense modifiers). Thanks to this the enemy infantry will die from acid even before they get hit with a sword. The effect lasts a few turns and each attack replenishes the number of turns. However, the effects don't stack up. Effects caused by burning and using acid combine which can make even the most difficult enemies easier.

The Crossbowmen on the tower (2) are easy to defeat. Move your dragon and the Wyvern closer, attack the enemy once and retreat during the next turn. After that you have to wait a few turns - the enemy will die due to fire and acid damage. Then, approach the first imprisoned Wyvern (3). Use your new forces to quickly eliminate the guards.

Time to recapture the second camp (4). There, you will find a teleport and a lot of Crossbowmen. These units are the biggest threat to your Wyverns so send your heroes to defeat them. Your infantry and the Wyverns should fight in the narrow passage with the rest of the melee units. Get closer to the captured Wyvern to add it to your army. Time for dealing with the camp leader who, luckily for you, isn't a big challenge. Remember to quickly attack him with your dragon and a Wyvern. Then you should surround him with your army. If you don't have enough of them then you should retreat and wait for the leader to die from fire and acid.