Before Arcaena and Sylvius leave the hideout in the mountains, they must fend off the attack of an Imperial expedition and wait for reinforcements. 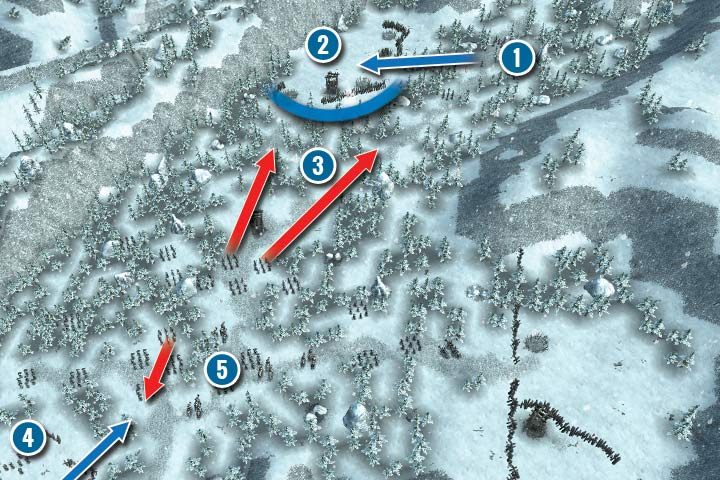 You start the mission in the location where you have completed the previous task (1). Your troops are few in number and are scattered throughout the forest. Right next to your position, to the west, there is a camp that you have recently captured (2). This is the best place to repel the enemy's attack in.

Fortify your position in the camp (2). Place the Archers on the barricades and towers. Arcaena, Sylvius, the Shadow Warriors and the Mage should be near the entrance, and the Healer right behind them. The key is to stop the enemy in the passageway, in order to block the way for the other enemy units. Therefore, only let Sylvius attack units that have a lot of health, and are in the passage or are able to pass through it. 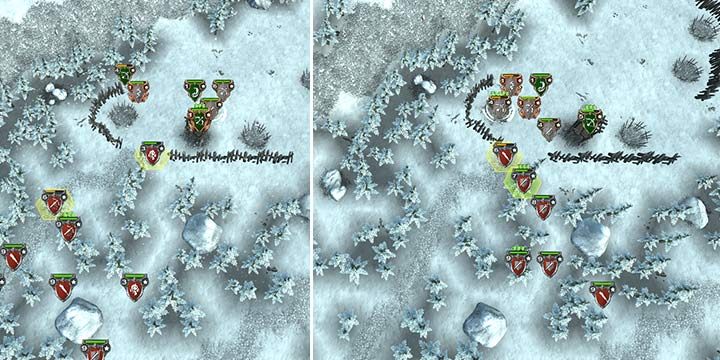 Mages are the greatest asset you have in your ranks. Sylvius can stop enemies from breaking into the camp, and the other Elf Mages will weaken the offensive capabilities of hostile forces.

The enemy will attack from the south and will mainly be using the road (3). The most dangerous for you are the Cavalry and Crossbowmen units. If you cannot stop them, attack the unit that is about to strike your troops next turn with the Elven Mage. Try not to allow your units to lose their numbers. Although you can still heal them to full health, they will not deal as much damage as before. The protection of Heroes, Healers and Mages is still the top priority. They are the most important units in your army.

After a few turns, you will receive additional units on the southern end of the map (4). From now on, the odds will be more even. Use the reinforcements to give immediate support to the troops in the north. Some of the enemies are close enough to attack the southern army immediately. Cavalry units will be the biggest challenge, so use the cover of the forests as often as possible. Then, start moving north, and keep your troops in a large group.

With the right tactics, the northern army should be able to withstand the assault for a very long time and without major losses. If you think that the situation in the camp is quite dire, retreat, and use the forest to join forces with the southern army. From now on, you can re-engage the opponent's troops freely. Use the forest as protection against the fire of the Crossbowmen and the charges of the Cavalry. You can also retreat to the camp in the south and wait for the enemy to approach your position.