The Elven expedition reaches the location where the sword they are searching for is most likely located. However, the Imperial army stands in their way yet again. 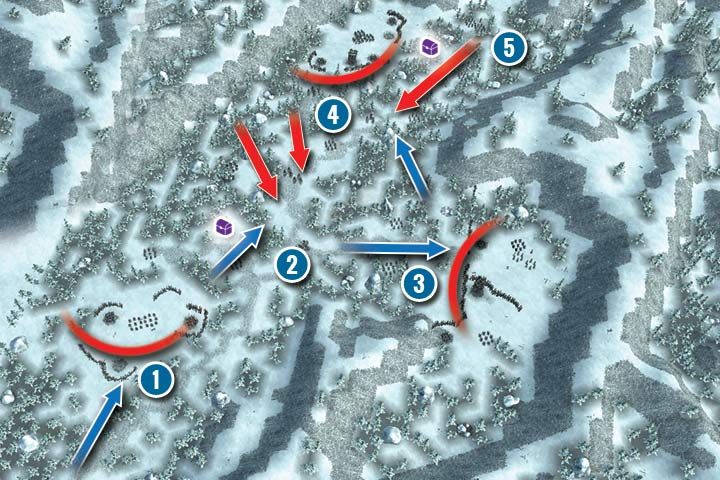 You start the mission in the southern part of the map with a small army of Elven units. There are three enemy camps on the map and a few smaller forces of Human soldiers. There are no portals on this map, so take care of each of your units and do not let any of them perish.

Firstly, clear out the first camp (1). This is quite simple because its garrison consists only of melee units. Take advantage of Sylvius's skills, the protection of the forest and the wooden wall that limits the movement of units. Now proceed further, to the northeast of the crossroads (2). Here there are two chests with a Shield scroll and an Elixir of Speed, plus some coins. You will also be attacked by several units here, including Cavalry units. Be sure to stop their assault and weaken them with the help of your Mages. Their charges can cost you a lot of lives. 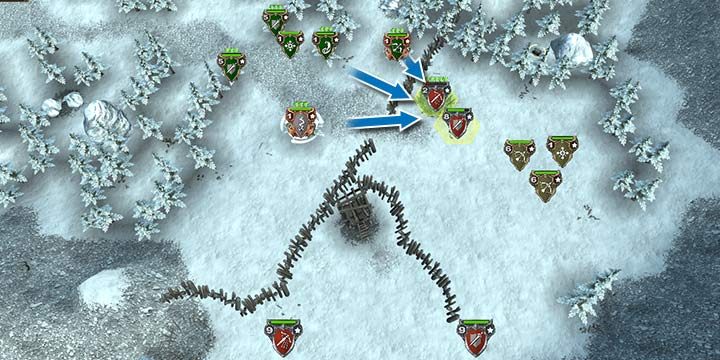 The heroes can deal with the guards easily. Just place them in the forest and eliminate the enemies one by one.

Before going further north, it is worthwhile to recapture the prisoners from the eastern camp (3). The enemy has Crossbowmen on towers and barricades here. Advance to the palisade with your units and send your heroes to the fields with the forest just in front of the fortifications. An Elf Mage who will weaken the crossbowmen will also be very useful here. Keep your Healers in the back and use them to heal your heroes. Start eliminating the nearest unit. When the opponent sends his Infantry troops, use Sylvius to stop them in the narrow passage. This way, you can easily deal with the entire garrison and free the prisoners.

Now it is time to reach the last enemy camp, which is located to the north (4). The group of defenders consists of three Infantry units and three Crossbowmen squads. Do not let the melee units leave the camp (use Sylvius) and attack the Crossbowmen first. Use the forest to nullify the damage from enemy fire or to flee from the Infantry. To the east of the camp, there is another chest and a group of enemies that should not start their attack until you get closer.

The last group of foes will be very challenging (5) because it includes a Battle Mage. As mentioned in previous chapters, the Imperial Battle Mages ignore terrain obstacles (as opposed to your Mages) and have a range of 5 squares. In addition, they also freeze units, making them unable to move or attack. You must use as many units as possible and eliminate the Battle Mage first, even at the expense of your units. Sylvius can only immobilize him, so it is better to use him to attack other enemies.

Playing the mission on a higher difficulty level means fighting with additional Infantry, Militia, and Cavalry units between the crossroads, the first camp (2) and the last camp in the north (4). The other groups will not change in number or in the level of experience. All units will gain the maximum experience level. It is still possible to win with the use of available resources, but it is worth investing in the statistics of heroes, Mages or Archers. You can also summon Skeletons or use Shield scrolls on Arcaena and use her as a decoy.