The humans do not want to back down and are preparing to retake the fort from Elven control. 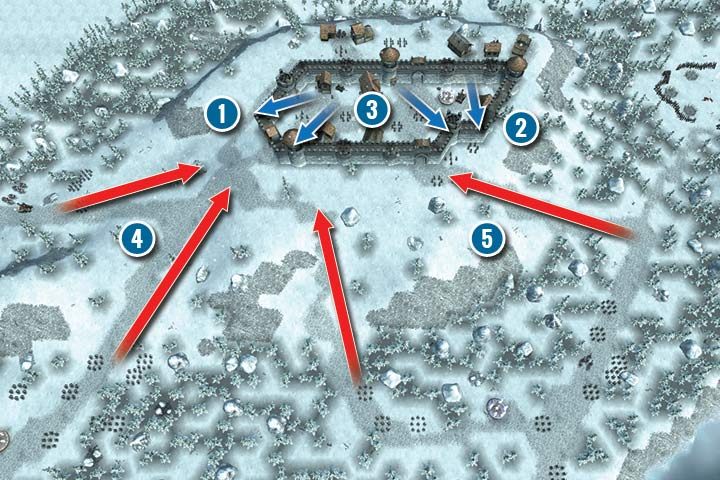 You will defend the castle which you have captured in the previous mission. The enemy will come from several directions, and their army will be quite large. Fortunately for you, your new garrison is also quite sizeable.

Start by placing Archers and Mages on the walls. There are several melee units on the western walls (1). Replace them with ranged troops and Sylvius. Warriors will not be useful on the walls, so order them down and put them right behind the gate. You can also put your Catapults in front of the gate, but be sure to pull them back before the enemy approaches their position. You should reorganize your armies on the eastern walls in a similar fashion (2). Take the troops from the northern part of the castle and put them on the gatehouse. The enemy will not attack from this side, so your troops will not be of any use here. Remember that units cannot pass through other units and enter/exit the walls only in the location of a tower. These are the only access points to the walls.

Inside the castle, there is a portal and a chest with a Rain of Fire scroll (3). Summon units that you are lacking. These could be additional melee units, e.g. Shadow Warriors or Bears. They will be useful when defending the gate if the enemy comes too close. You can use the Shield scrolls from the previous mission on them, which will give them a lot of survivability. Your army includes healing units that will also help with keeping the defenders in the fight. You can set up your Catapults in a straight line behind the gate. This way, they will be able to attack units which are trying to assault the entrance to the castle.

After a few turns, there will be a small turn of action - some of your units will escape from the battlefield. You will not have any say in this, and they will be selected randomly. If they are on the walls, make place for them and let them leave their stations so that they do not block the movement of your troops.

The enemy has a large army that attacks from four directions (4,5). The composition of the opponent's army is primarily a mix of Infantry, Cavalry, and Crossbowmen. The troops advancing from the west (4) will have catapults and numerous units of crossbowmen in their ranks. These units should be your priority targets because they are the only ones that can threaten the defenders on the walls. After eliminating the ranged units, dealing with Infantry and Cavalry will be much easier, if they are away from the gate. 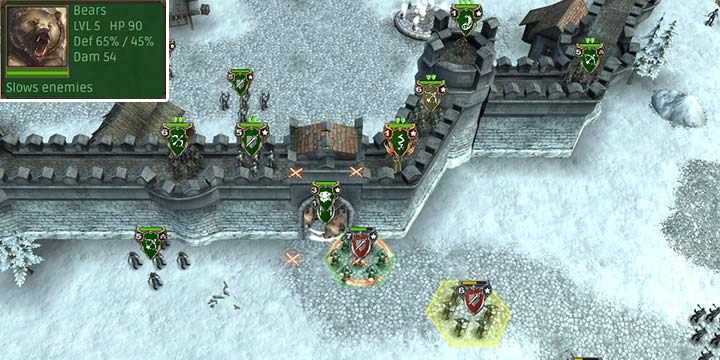 Bears are a powerful unit that has a lot of health points and high damage reduction. This is the perfect defensive unit. Put them in the gate and keep them close to the Healer so that you can maintain control over the gatehouse.

Cavalry and Infantry units will attack from the east (5). Ignoring this threat can be tragic in consequences, although the defense on the walls can last a long time (even if the enemy breaks through to the inside of the fortress; the Cavalry cannot enter the walls). Sylvius will be useful here (he will stop the opponent's army in front of the gate) or a strong unit placed in the gatehouse so that the enemy will first have to defeat the unit before the gate can be destroyed.

Playing the mission on a higher difficulty level means fighting against a larger amount of enemy troops. The biggest challenge will be the additional siege engines which will now be a part of almost every group that is attacking your position. More enemies will force you to be more active in your defense or use more defenders at the gates. You can also summon a fast unit, e.g. a unicorn, use a scroll to cast a Shield spell on it, and then move it in front of the castle to lure enemy units into pursuing it or to use it for a suicide mission to destroy an enemy Catapult.