After a miserable defeat, the humans withdrew to a nearby fort. You must defeat them and drive them out of the area! 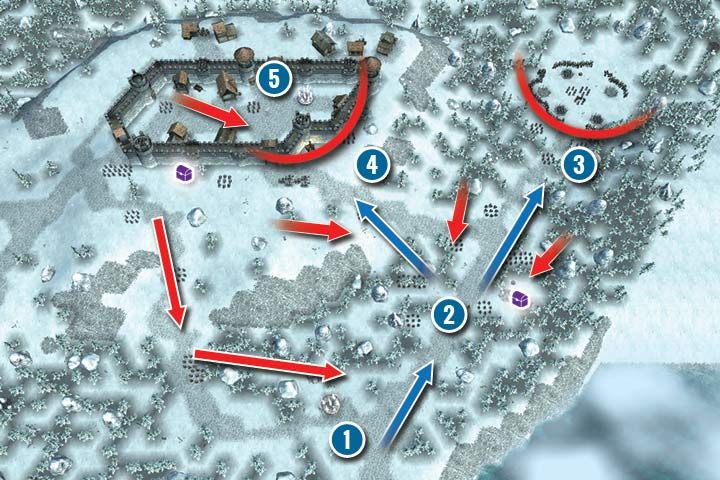 You start the mission south of the fort (1). From this position, you can immediately assault the opponent's walls, but it is worth to first set out to the northeast, in order to recapture the prisoners. Catapults from the previous mission will be a part of your initial army. They are very important in this mission. Thanks to them, you can easily maintain an advantage over the enemy forces. First, get closer to the portal and wait for the units that are advancing in your direction. 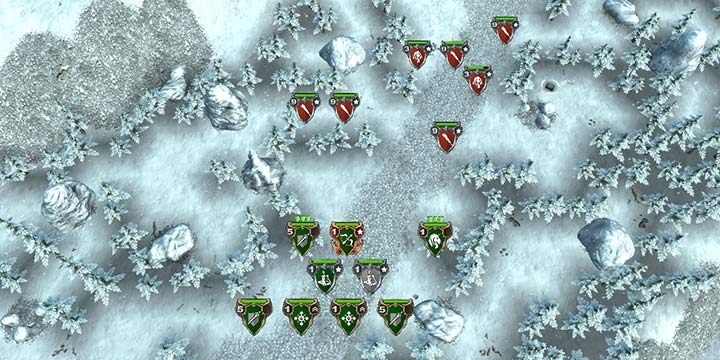 A slow advance towards the camp will allow you to use the firepower of your Catapults. Start by eliminating the Cavalry, which is a very mobile force in the open field.

After repelling the first enemy attacks, you can start a slow march to the north-east (2). Right next to this location there is a chest with a Lightning Bolt scroll. The biggest challenge will be the hostile Cavalry units, which will move quickly on the road and deal very high damage. Due to the presence of such mobile foes, all of your units, especially the Catapults, will be at constant risk. Try to use your Mages to stop or weaken these units in the first place. Wait for enemies to come to you and make use of your siege engines.

It is time to recapture the prisoners (3). You do not have to send all units to the encampment. The forest will block the movement of troops and line-of-sight for ranged units. All you have to do is send your Heroes, a Healer, and a Mage or Archers to recapture the units from the camp. When you approach close enough, the enemy will attack your troops. After eliminating the guards, your forces will be bolstered by the former prisoners.

The final stage of the mission is the capture of the nearby castle and the elimination of its defenders. Gather your troops in front of the eastern part of the castle (4). First, close the distance to the walls and attack the enemy Crossbowmen with your Mages in order to weaken them. You should then bring in your Catapults, which will deal the most damage and destroy the units on the walls. While walking along the walls, you will discover the second chest on this map, which contains two Shield scrolls (they will be useful in the next mission). You can also use the portal inside the castle (5). The defenders from the other parts of the fortress will come in to reinforce their allies. Destroy the gate in order to bring your soldiers inside of the castle and deal with the surviving enemies.