The empire troops have set up a camp that blocks roads in every possible direction. Your Heroes must rid this place of all enemies. 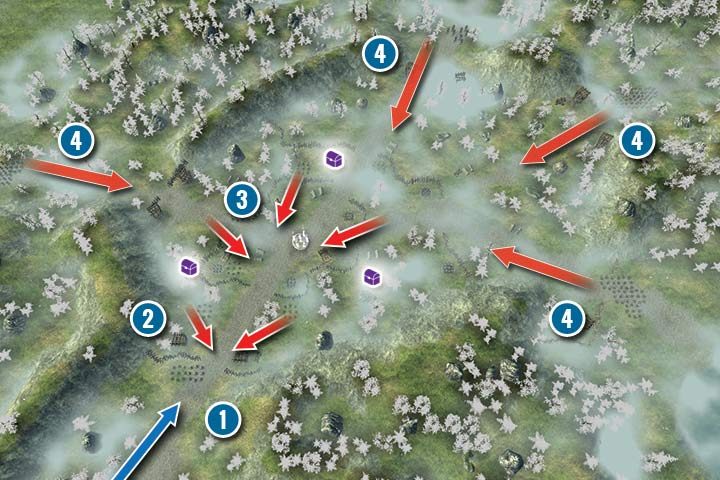 You begin the mission in the southern part of the map (1). When you approach the outer fortifications (2), some of the hostile units will move in your direction. Let them get closer and use the numerical advantage of your army. Now start slowly heading towards the center of the encampment.

There are several enemy units inside the fortifications (3). Militia squads are the weakest units that you will face. The biggest threats are Infantry and Crossbowmen units. Use Sylvius to fight the first of the two. This way, you will immobilize the enemy and get rid of nearby hostiles. Whenever possible, bog them down in narrow passages or near forests in order to slow down your enemies even further. If you cannot take advantage of Sylvius's skills, and the Infantry gets too close to your units, save yourself by retreating or attack them with an Elf Mage. The weakening spell inflicted by the Mage will effectively reduce the damage dealt by the Infantry. Use similar tactics when dealing with enemy crossbowmen. After being hit by your Mages, they will deal less damage, which will result in fewer casualties in your army. Inside the enemy's camp, there are three chests, each containing one minor speed potion and some coins. You can also use the portal to summon strong melee units, e.g. Shadow Warriors or Bears. 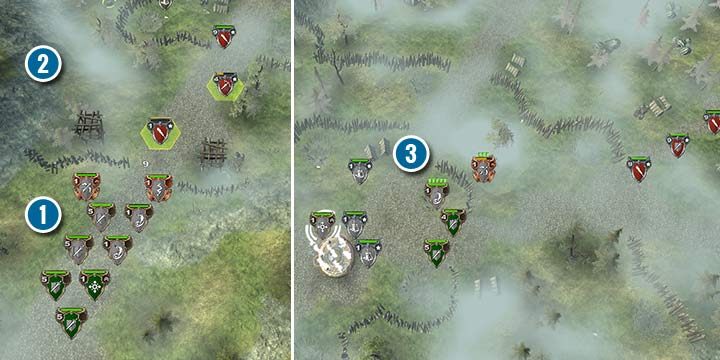 Before your troops enter the camp (1), use Sylvius to immobilize the enemy units (2). Then, set up the Catapults in the center of the camp, and secure the entryways with the other units (3).

After eliminating the garrison, all catapults in the camp will fall under your control. You will also be informed about the enemy's advancing reinforcements on all four sides (4). On the normal difficulty level, each group consists of 1-3 units. Cavalry will arrive from the north and Crossbowmen from the east. The remaining groups consist of one of each of the following units: Militia, Crossbowmen, and Infantry. The best choice is to set up the Catapults inside the camp, next to the portal. Place the remaining units at the entrances to the camp or on barricades. The siege engines will give you the necessary firepower to defeat enemy units if you provide them with sufficient protection and do not allow hostiles to approach them.

Playing the mission on a higher difficulty level results in you fighting with slightly more enemies in the camp and with larger enemy reinforcements. Although the enemy numbers will only increase slimly, all hostile units will also have the highest experience level. The units that will attack you later (4) will grow progressively with each successive level of difficulty (from 1-3 units to 3-6 units). You will require additional melee troops to engage enemy squads or siege engines. Sylvius can also stop the enemy forces in the narrow passages, thanks to which the other units will not be able to find an entrance to the encampment (the walls are indestructible).