Arcaena and Sylvius encounter a small village in the mountains. Their goal is to find a legendary sword, but they meet some unexpected guests. 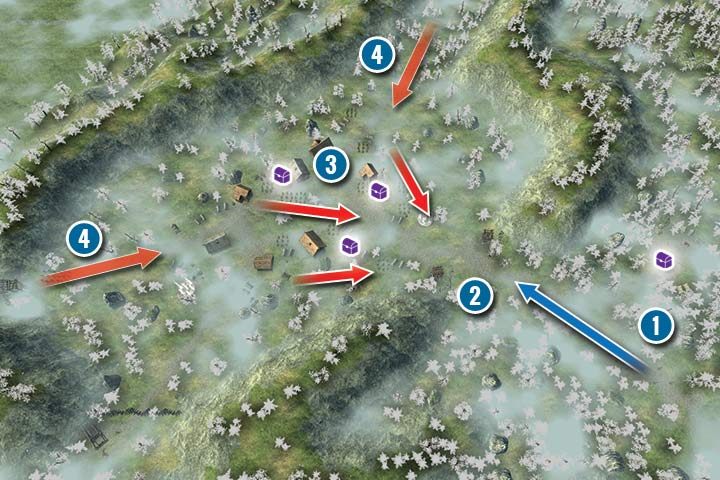 You start the mission with a small force, consisting of several units and heroes (1). Before you approach the village, check the contents of the chest next to the starting location. You will find two larger healing potions and some coins in the said chest. Now gather your army just in front of the entrance to the village (2). The front guard will let you in at first but then will begin to fight you. This is why it is important that you have your soldiers in one compact group.

Enemy units will attack you from all over the village (3). These will be mainly squads of Militia and Crossbowmen. If a hostile unit is getting close to your archers, order Sylvius to attack them (you will bog down the target unit) and barrage the other units. In the village, there is also a portal and three chests (each containing a Lightning Bolt scroll).

On the normal difficulty level, there is no need to summon reinforcements, although you can summon a melee unit, e.g. a Unicorn. The advantage of expanding your forces with such a unit is the ability to provide support to your ranged units. You can also attack and at the same time give ground and slowly pull back your units to the forest. Archers and Mages have a large range, and a concentrated volley will eliminate Crossbowmen or Militia units. After some time, the enemy reinforcements from the west and north (4) will arrive. You will finish the mission after defeating these units.

Playing the mission on a higher difficulty level will result in fighting the same number of units in the village, but you will encounter more resistance from the incoming reinforcements (4). Battle Mages will arrive from the north, and they will be the biggest challenge for your force since they can freeze your units. You must gather your forces and commit to a massive, decisive attack in order to overcome their advantage. If you attack with small groups or individual units, you will not be able to defeat them.