This is a special class of units, which you can recruit after you have bought two buildings - first the Guild of Mages and then the Tower of the Mages. It is the most useful unit in the game throughout most of the campaign, until you encounter enemies that resist magic. It has as much as 5 advantages: an attack range of up to 5 fields, its attack is not affected by obstacles on the ground, it can move and attack at the same time, the amount of damage does not affect its attack power (this is just one man, although a rather fragile one; he's got few health points), and can freeze enemies. 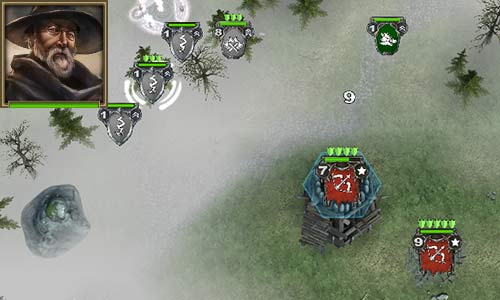 The Mages biggest strength is the ability to completele freeze most enemies. This makes defeating such enemy that much easier.

This last feature is the most useful ability in the whole game. An enemy unit cannot move or attack after having been frozen by the attack of a Battle Mage. A group of Mages can block several enemy units or keep enemies from breaching the fort gate. However, they do not deal much damage and are very vulnerable to fire. It's best to place them behind terrain obstacles, e.g. behind walls, and then attack enemies with lightning bolts. They are irreplaceable in the elimination of powerful enemies such as orcs, dwarves, siege engines or other mages. They will be useful for practically any mission, especially in situations where you're on the defense and have your defenders available from the beginning of the task. Recruitment costs are quite high, but you can summon them for as few as 10 coins.