A cavalry charge from two or three fields can inflict devastating damage. This is the greatest strength of this unit. It also has a movement range of 3 fields, which enables it to quickly approach the enemy and deal significant damage. The downside of this formation is the fact that they cannot attack units on walls or take advantage of a charge bonus against units hidden in forests or fortifications. Therefore, they will be useless during sieges, although many garrisons have more defenders on the ground than on the walls. 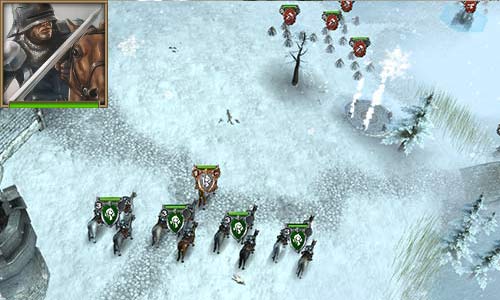 Cavalry charge can make a dent even in the strongest enemy units. It is a fast unit that can take out any enemy (but only assuming the enemy has not climbed a wall).

Moreover, the unit can only have three people and the number cannot be increased. You'll quickly notice that after the it takes damage, the strength of the unit drops, but the Cavalry can deal a lot of damage even with only one rider. The big problem is also the use of their charge in difficult terrain. Not all missions will allow them to take advantage of their strengths, because they perform best in the open field. In spite of many disadvantages, it is still worth summoning at least one unit in many missions to help Percival in various hit & run maneuvers. Their speed and strength will help you eliminate dangerous units and will put down powerful enemies. They have an average teleportation cost of 20 coins.