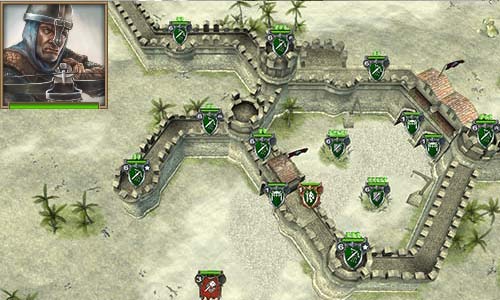 The first missions will teach you how to use Crossbows effectively. It is best to place them on high positions, from which they can attack in all directions.

This is your basic range unit. Every man in the unit deals damage, so the loss of every soldier equals reduction of offensive capabilities. It has a range of 4 fields, but cannot attack and move at the same time. Therefore, placing them in the right position is very important so as not to waste time later on changing the location. If possible, place the Crossbows on a hill, wall or tower. This will increase their attack power. You must also be aware of obstacles on the ground that will limit your firing range. The enemy units will often set up in such a way that they are out beyond your range.

If you cannot use the area to protect your crossbowmen, set them up behind your other troops. This way, the infantry will protect them from quick death, and in turn the Crossbows will help you eradicate the enemy. Often, it is better to have them escape and reach better positions or bring in help. Many missions are focusing around defending a location, so you will often use them. They have small cost of teleportation, so it is worth calling them during most of the missions.