It's the only unit that takes part in all missions. It's your strongest and most durable unit as well. Treated as a cavalry unit, Percival can benefit from a charge bonus, but cannot cross woods and barricades, nor climb walls and towers (even if there's an elevator available). He has 3 movement points and is quite resistant to enemy attacks. 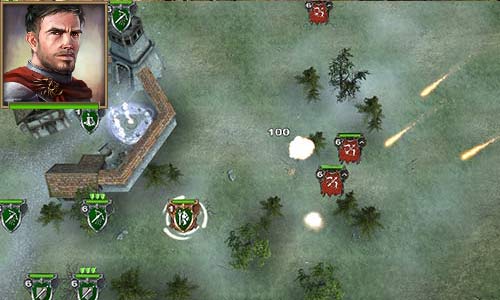 Only the hero can use powerful magic spells, such as Fire Rain.

His biggest strength lies in the ability to use Potions, Poisons, and Scrolls. Those support items will often make the difference on the battlefield, leading to victory or helping you avoid defeat. You can also increase the range and the number of your available spells, to be able to use more Scrolls and Potions. The latter will be especially useful later on, when you'll have to deal with emergencies - healing, destroying an enemy unit, or reinforcing your army.

If you want to actively use your hero in battle, don't forget develop his skills. You'll need at least one level in Regeneration, which provides healing to the hero every turn. In addition, it is worth investing in Personal Training, which will increase his health and damage. If you want to strengthen your army first, you should focus on the Troop Management skill. This way you'll increase the number of troops in certain units (Militia, Infantry, Pikemen and Crossbows) and each level will increase the life points of a given unit. This way, they will be able to deal full damage for longer, despite injuries and losses.