This is a unique group of enemies that you will come across in the later parts of the campaign. You can also summon these units by using scrolls acquired from the Mages Guild (Dead) or you can buy them in the game's shop during missions (Golems). 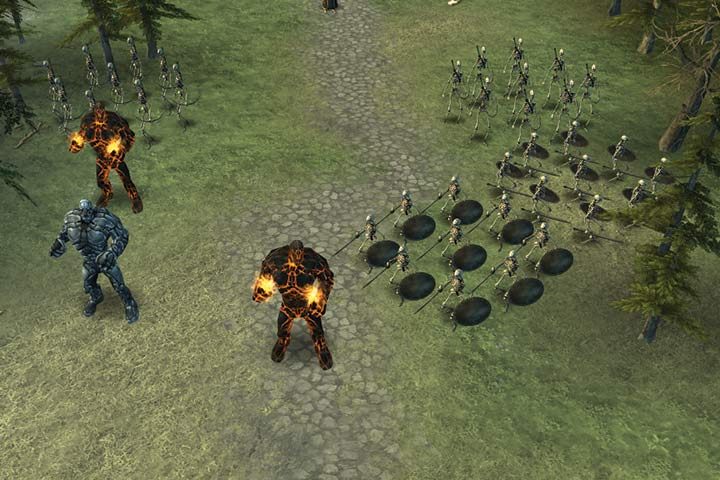 Golems and Dead are very resistant. Stone Golems (on the left) with their ranged attacks and Lava Golems (in the middle) and their powerful melee attacks can cause you a lot of problems.

All of these units have a lot of health points and great ranged damage reduction. However, they have zero melee damage reduction. Dead have about 180 health points. Both of their types, Skeleton Warriors and Archers, deal medium damage and have 9 soldiers each. Regular Skeletons are an equivalent of an infantry and are better at combat while Archers can move and attack during the same turn.

Golems are unique enemies and they are very difficult to defeat. Their advantage is magic resistance. They are invulnerable to both Scrolls and Mages' special attacks (however, they aren't resistant to some of the area of effect spells, e.g. Fire Rain). Stone Golem has 300 health points and can use powerful area of effect attacks. Lava Golem has less health but it uses deadly melee attacks (150 damage). Both types have only 1 soldier per unit. Always focus on killing one of these units first before you start attacking another. Massive Cavalry attack and Poison potions area great way to kill them. A perfect solution is to eliminate that unit during one turn when it is separated from its allies.