Elves are a difficult enemy - all of their units, except siege equipment, have a unique trait. Each of the Elven units can move in forests as if they were empty hexes. Thanks to that the Elves are an unpredictable enemy. You can be often forced to change a tactic and stop using solutions that helped you when you faced other factions. 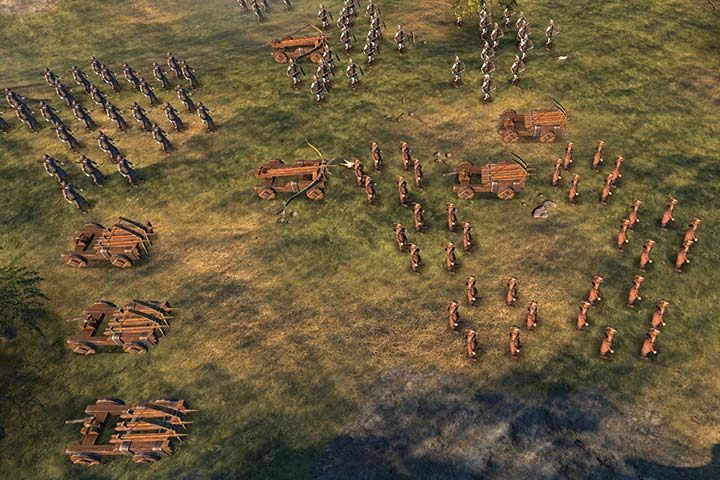 Elves like to use Archers but you will often come across other types of units, especially ranged ones.

During most of the missions their armies consist in 80% of Archers (Elf Scout). They will flood you with these units. To counter them you will need fast Cavalry units (if a map has a lot of open spaces) or Infantry (great ranged damage reduction). Catapults are also useful (one attack in an open area is usually enough to eliminate a unit), the same goes for Mages (freeze).

Sometimes, you will come across their infantry, Shadow Warriors. This unit uses melee attacks and has rather good stats - good damage reduction, a lot of health points and can move in forests freely. Elf Mage works as usual - great reach and ability to ignore environment obstacles. Also, these Mages can weaken enemy units for 10 turns. This ability lowers an attacked unit's damage. In most of the cases the Elves will attack the strongest unit. Because of that you should always focus on eliminating their Mages first. Usually, the enemy uses a small number of Mages and they appear only in certain missions.

Healer is the unique unit of this army. Currently, this is the only unit in the game that can heal others (both regular units and machines). Healer can't attack and is extremely vulnerable to both ranged and melee attacks. This unit can't participate in fights, it can only heal allies. Elves also have siege equipment - Ballista and Scorpion. They are slow, they can't move and attack in the same turn but they have a fantastic reach and deal tremendous damage. Always check their reach first before you make a move. Scorpion has no minimum reach which means that you have to eliminate this unit in one turn.