One of the most durable armies with diverse units. Their units can withstand a lot and some of them can regenerate health points per turn. What makes this faction unique is that all of its units have a unique trait. Sometimes, they are your enemies and other times they will be yours to command. 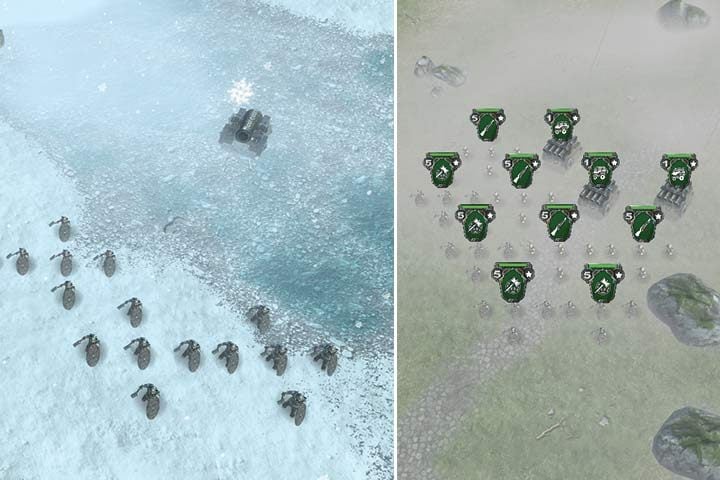 Dwarves are your enemies in some of the missions while in others they fight alongside you or go under your command.

Their melee units are Warhammers, Boars of War and Berserkers. The first unit has a lot of health points and a good damage reduction. But usually their units consist of 5 soldiers. They are difficult to defeat so try to weaken them from a distance first and freeze. Berserkers deal a lot of damage, can move 3 hexes, have up to 8 soldiers in a unit and can regenerate health points per turn. However, they don't have any damage reduction which means that you can eliminate them in no time. Boar of War is a Dwarven version of Cavalry. This unit has 140 health points, has 1 soldier per unit, can use charge and health regeneration which makes it the most valuable unit in your army.

Dwarven army has no mages but they have a great variety of ranged units and siege equipment. Riflemen are similar to Archers from other armies. Short range is their weakness (only 2 hexes) but they can move and attack during the same turn. Also, their attacks can pierce armor (they ignore damage reduction bonuses). Cannon is a typical siege equipment (an equivalent of a Catapult). Hellfire has a short reach (1 to 4 hexes) but it deals tremendous damage. Mortar's reach is shorter than that of a Cannon but it ignores environmental obstacles which is very important during sieges or fights in forests.