You have managed to successfully locate the Dragon. Dwarves want to kill the beast personally but not everything will go as planned. You are the one that has to slay it! 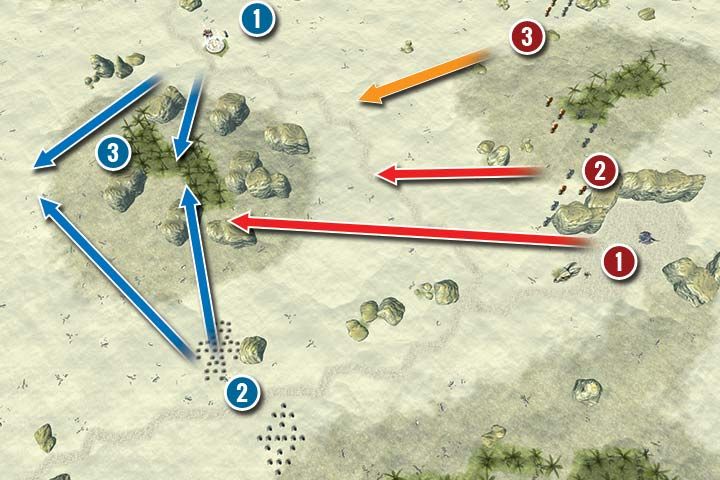 You start the mission with 2 heroes located in the north, next to a teleport (1). The Dwarven hero is fighting with the Dragon but he will be defeated in the third turn. After that his armies go under your command (2). The groups consist of 4 Berserkers and 4 Warhammers. The characters mention something about getting protection by running between the hills and the mountains (3). More about that later. The Dragon's lair is in the east (1). Golems stand right in front of it (2). They become active after the death of the allied hero.

Your goal is to slay the Dragon. After that the mission ends which means that you don't need to eliminate the dangerous Golems. The Dragon has 1000 health points, 200 damage, is resistant to magic and can regenerate 50 points per turn. On top of that, the beast is very fast and can move 5 hexes. His speed will be his doom. Golems and your units can move only 2 hexes. The key to success is to fight him away from the Golems. You also have to surround him before the Dragon's army reaches you. Thanks to that he won't be able to go anywhere and you get a chance to decide who and how many units will attack the Dragon. However, you must prepare yourself first.

The Dragon and the Golems start moving towards your nearest unit in the third turn. Because of that you should send the Dwarves into the forest (3) located between the teleport and their starting location. Do the same with your army. These lands let you surround the Dragon with greater ease. However, this also means that the Golems have to travel a shorter distance. The forest can also provide protection to your units, e.g. the Berserkers are able to survive the Dragon's attack. After that you can retreat them and switch with another unit. Let them regenerate fully before they make another attack.

There is an even better and more difficult strategy - send all units west from the hill with the forest (3). The Golems will either move in a straight line or try to go around the hill. This gives you a few turns. Remember that Berserkers can move 3 hexes which means that Warhammers will stay behind. Don't stop and run towards your other units. The goal is to surround the Dragon and attack him with as many units as possible. The downside of this solution is that your units aren't protected by a forest which means that they will die one after another. 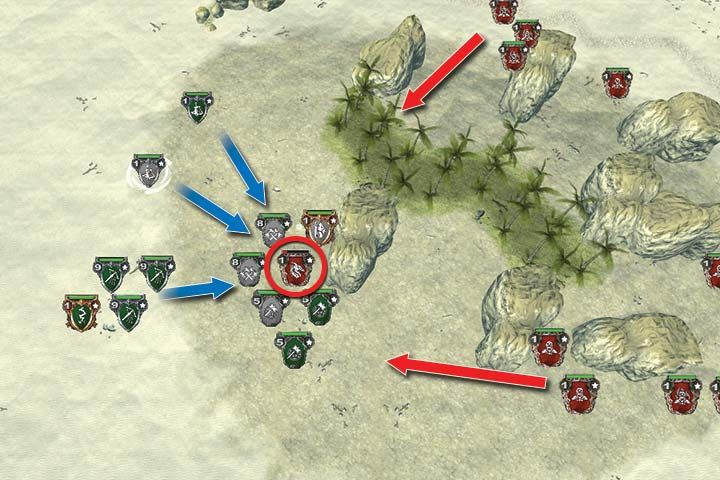 Surrounding the Dragon while the beast is away from the Golems is important. After that you have to shoot and attack the Dragon with all your army. Remember to fill up empty spots left by killed units.

Mugai Ran needs to stay away from the Dragon's reach. Percival, strengthened by Shield scroll, can attack the beast. You should cast a Weapon scroll and use any of the Poison potions on at least one unit (Percival, Berserkers or Catapults). Your hero is the best choice because he can move back 1 hex and use Charge. The Dragon usually focuses on weakest or ranged units. This is the reason why the beast should be surrounded. Summon as many units as you can. There is no point in choosing which melee units you should summon because they will all die from one attack. However, they can help you surround the Dragon. Call 3 Infantry or Militia units. You should also summon 3-4 Crossbowmen or Catapults. Siege Equipment may not get to the enemy in time so use Light Feet Potion or Speed Potion on them. Mages aren't useful here because they deal the least amount of damage and all enemies in this level are resistant to freeze.

Playing the mission on a higher difficulty (orange markings on the map) won't affect the Dragon's stats. However, there are more Golems (2) north from his lair (1). Also, you can notice new groups that will appear west from the teleport (3). This shouldn't be a problem if you stick to the plan described above.