You have to ambush a renegade Mage. However, the number of enemies and their strength turns this ambush into a long and difficult battle where the biggest threat is caused by the enemy hero. 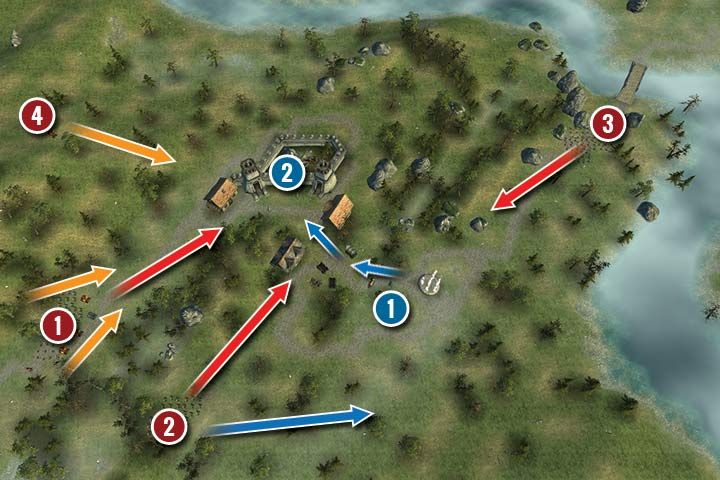 This mission starts in the middle of the map, right next to the only working teleport here (1). You get 2 heroes and you can summon additional units. There is a small fortification nearby that consists of two towers (2). There, you can find 4 Mages. Summon Infantry, Cavalry, Crossbowmen or Catapults instead of those units. You don't have to defend a specific location but the tall towers will allow your ranged units to deal additional damage.

The enemy army is located in the west and it consists of Skeletons and Golems (1). However, the enemy hero is the biggest threat here. He will keep summoning additional units (usually Skeletons). This hero is a mage (his attacks ignore environment obstacles) and his special ability ignores armor which means that it can deal massive damage. He is your main target but first you should eliminate the Golems. These enemies can quickly defeat your units if you focus too much on the hero. Attack only one unit. Use your hero/Cavalry (remember to strengthen their attacks) to deal massive damage. A Catapult can be really useful once you defeat the Stone Golem (has ranged attacks).

The second group of Skeletons is located a little bit to the south (2). They will need a few turns to go through the forest. You can also freeze enemies if they get dangerously close to your units. Both groups start heading towards the small fort but after that they will begin chasing your units. The third Skeleton group is located north-east (3). They will also start moving towards your forces (the red arrows).

Playing the mission on a higher difficulty (orange markings on the map). The enemy gets more units (additional Golems) in the west (1). Defending yourself in towers may be insufficient against such numerous enemy. However, eliminating the enemy hero is still your priority. Otherwise, he will flood you with newly summoned units. Besides that, you also have to prepare yourself and face Wolves in the north-west part of the map (4).