It is time for the Dwarven iron fist to strike. You are accompanied by the allies and your goal is to crush the remains of the Elven army that stands in your way to their capital. 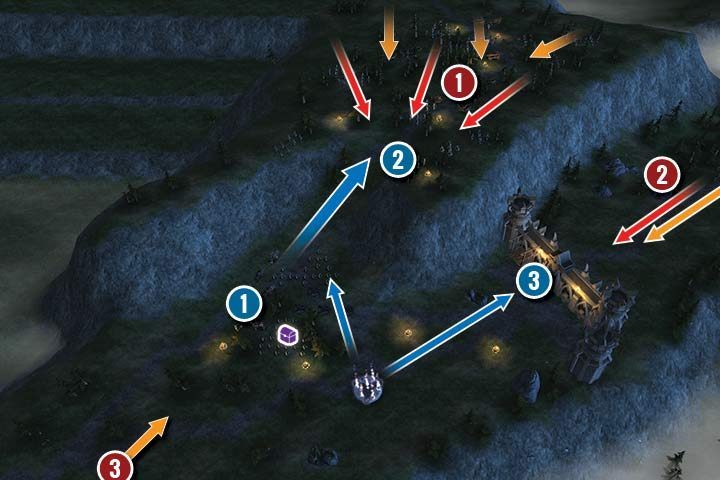 This is the decisive battle with the Elves. You get a lot of Dwarven units to command (1). Next to that army you can find a chest with scrolls that strengthen attack and increase damage reduction. These scrolls are useful for Berserkers and Boards because they are the first units that will clear the narrow road. You have to quickly capture the beachhead on the hill (2, the big arrow). You must bring Cannons and place them behind your army to defeat the incoming Elven units. Otherwise, they can take position on the hill and will be able to eliminate your melee units without any problems. Use the teleport to summon Crossbowmen and Mages. Use them to stop the units that are coming from the east. Place them on the gate's walls (3).

The enemy has a rather large army on the hill but they also get a new unit - Elf Mage (1). They can attack from a distance and can weaken enemy units by lowering a target's damage. Also, a lot of enemy units is waiting for you to get on the hill. This place is full of forests which means that fighting will be more difficult. Later, your army will be attacked by small eastern groups that usually consist of 4-5 units (2). They aren't numerous but a back attack can hurt you a lot.

Playing the mission on a higher difficulty (orange markings on the map) requires a greater defense on the gate and a well-planed attack on the hills. You have to be prepared for an immediate attack aimed at your back that will come from the west (3). That group consists of Archers. They can cause a lot of damage to your Siege Equipment. A large Elf army approaches you from the east (2). Send one or two Dwarven units, e.g. Boars, because they can heal themselves. Each of the fronts can use a Mage or two. Use them to freeze enemy Mages and Ballistae but try to not block other units.