You come across a fort. It has no soldiers because they were all killed by Undead. Your hero decides to recapture this place. The biggest challenge here is to defeat enemy units - they have a lot of health points. 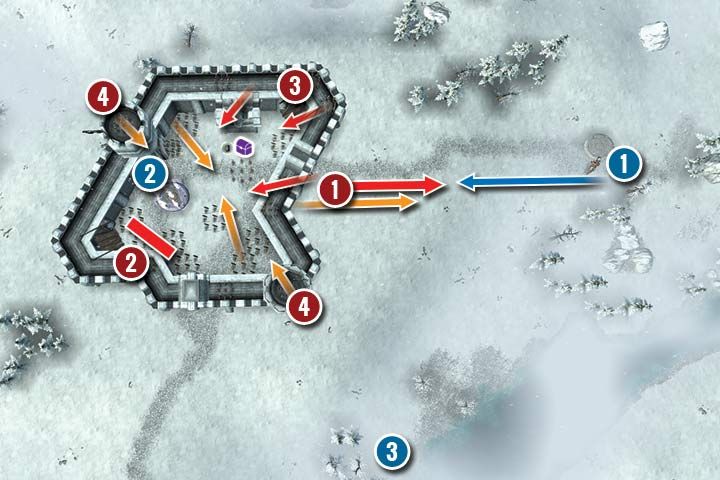 The mission starts near a broken teleport (1). You can immediately run towards the fort but beware, some of the enemies will start walking towards you (1). These forces will consist of two Skeleton units. A hero with at least one level in Regeneration should be able to handle them (although it will take him a while). A working teleport is inside the fort (2). You can use it to call more units. The first thing that you should do is to capture the empty tower. However, this task may require a Speed Potion (that is if you want to do it in one turn). Placing a ranged unit there is your best choice. A Dwarven army is also on the map (3). However, they will not participate in fights.

Skeletons are a challenging enemy. They don't have any special abilities but they are their units are very resistant. Inside the fort, you can find 3 squads of Skeleton Infantry located near the teleport (2). The first thing that you should do is to send your hero there and see how things will play out. Try to lure them away from the teleport so you will be able to summon more units. There are 3 Skeleton Archers squads located on the eastern walls (3, the arrows). Defeating them has the same priority as defeating the units on the ground. Your hero can't use a ladder nor an elevator which means that you have to summon someone to kill them. Defeat the Skeletons near the teleport and summon, e.g. a Catapult and place it on the walls. You can do that by using the elevator in the south and then place the Siege Equipment on a tall tower.

There is also another, rather risky and dangerous, tactic that involves summoning 6 Mages and freezing everyone in the fort. However, this should be done only after you deal with the units that move towards the hero. This tactic works only on normal difficulty. Other options involve using Lighting scrolls on the Skeletons on the walls or summoning Infantry and strengthening it with Shield and any of the Weapon enchanting scrolls (such as Soul Weapon scroll).

Playing the mission on a higher difficulty (orange markings on the map). You have to face bigger forces that move towards your positions (1). A hero with buffed stats can still manage to defeat them. You can also strengthen him with Speed Potions which allows him to deal more damage while using Charge. More Skeletons await you in the fort. The problem here is that some enemies are already on the tall towers (4). This means that the tactics for the normal difficult may not work here. The best solution is to summon Infantry as fast as you can and try to get them on the walls while your hero fights on the ground. Summon ranged units the moment you get a chance to do that and send them on the walls.